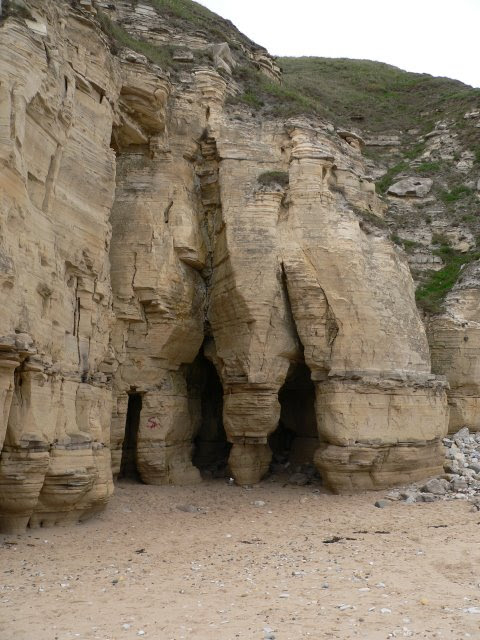 Having begun to Learn the Dungeon, and now equipped with a better grasp of marching order and the importance of armor class, my six intrepid middle school students were ready for their next lesson in dungeoneering.

As they left the Fallen Colossus behind (unexplored) and crossed the rubble field toward the inviting pair of cave mouths on the western end of the crater wall, one of the three surviving elves spoke up:

"I'm going to check behind us."

Lesson Time! -- "You see maybe a half-dozen hunched creatures darting through the rubble behind you.  They are less than 100 yards away and are staying behind cover as they follow." [more mongrelmen, but of course I wasn't about to tell them that]

"They are trying to sneak around behind us!"
"We should go attack them."
"I use magic missile!"
"No, don't waste your magic missile, these guys are weak."
"Look, no wait.  Look, the archers should all stay here and we'll run around the sides and get them."

The group adjusted quickly and, executing a successful pincer maneuver, put this second pack of mongrelmen to flight.  After a little debate they then entered the left-hand cave mouth (more mongrelmen were spied in the right-hand one, but to my surprise these were ignored on the grounds that they were easy to beat and would probably just run away).

I hadn't mapped or stocked The Caves and had no notes prepared, but knew that they weren't too expansive and basically formed a figure-eight.  The group assumed their standard marching order as they entered.  A series of simple choices presented themselves: Go straight or take the [trapped] side tunnel?  Continue into the area with the four-foot ceiling or backtrack?

Soon, torchlight reflected the eyes of a throng of strange creatures as the party entered the mongrelman tribal lair and, despite the disadvantage of a low ceiling [-1 to hit for non-dwarves] the explorers decided straightaway to send their knight and both dwarves in for a charge while all three elves took a knee and fired down a broad set of natural steps at targets of opportunity from the second rank.

"We can get them.  These guys are easy."

And then they forgot their Lesson .... nobody remembered to check behind ...

I decided to give them a fair chance.  The flanking pack of mongrelmen was only four strong, but then the dice spoke loud and clear.  Two elves dropped in the same round -- one had his throat bitten out while the other was held down and his head staved in with a sharp rock.  The remaining elf wavered, but chose to fight on.  The flanking mongrelmen were down to two combatants when they pulled him down shrieking, hooked fingers in his eyes.

The heavily armored front line still had a chance, it would take the flanking mongrelmen at least a round to reach them, but their rolls began to falter and the explorers couldn't seem to connect.  Then it all went pear-shaped.  A dwarf dropped, followed shortly by the knight, leaving one lone dwarf.
"You're dead man."
"You should run."
"No, fight it out, look at your armor class."
"No, you're dead."

The dwarf fought on -- he dropped one foe, then another.  The enemy attacks poured in [all rolled openly of course -- I don't have room for a DM screen].  He took a hit ... a point of damage, dropped another ... two more hit points lost ... killed a fourth mongrelman

As the huge mongrelman chief awoke in the depths of the cave and came snuffling up the back stair, the lone, surviving dwarf looted a bow from a dead elf and quickly searched the area.  Behind the bars of a primitive bamboo cage lurked a frog-thing [a sneak-peek of the bullywug tribe].  He stood well off and shot it dead before hacking his way into the cell.

Kicking aside a small cairn of stones and peeling back a decaying reed mat, a small cavity [with scorpions] was revealed -- a jar of *something* and a jade necklace waited within.  He flirted briefly with the idea of hiding in the cell and hoping that whatever he heard coming would pass him by, but in the end opted instead to snatch the necklace and dash under the low-hanging ceiling with "The Big One" hot on his heels.

In the end, I ruled that he dwarf's size saved him and allowed him to dash back to The Wall and escape up the cleared Black Canyon, and through the jungle to The Stockade [the fortified base camp].  Once there I allowed him to roll 1d20 x 20 to determine the experience point value of the necklace [180], bringing the lone survivor to an impressive 300 xp [In Dagger you move up to level 2 at 1000xp]

While I had initially planned to run an entirely separate group through Bawal Bayan next class, using fresh explorers from The Stockade, I decided instead to allow the dwarf (who is almost established enough to need a name) to return and act as "trail guide" for five other players next class.