With the five students whose characters had perished last time in Bawal Bayan under the claws of the mongrelmen paired up and working on their choice of reflective writing assignments, and the player of our lucky dwarf survivor eager to serve as trail guide, we quickly filled up the table with five more players.  Three of the students (boys) had spent some time with console gaming, while the two girls had not, and none had any experience of paper-and-pencil tabletop outside of the three large group sessions (23 kids) that I had offered in the prior week.

This second expedition into the crater and the ruined city was composed of two dwarves, two elves, a knight, and a wizard.  Most of the students decided to try a different character class this time compared to when we played whole-class, and I'd be really curious to see what influenced their decision making.  What had they learned?  Or was this simply the tug of novelty on the teen brain?

I let them roll for three rumors:

Before getting underway at the table, I did a little Q&A with the player of our veteran dwarf to encourage him to articulate what he had learned, to see how his choices had influenced outcomes (cause and effect thinking), and to begin helping the newer players to Learn The Dungeon.

"So how did you guys get trapped last time?"

"We just went in the cave and the ceiling was low. We picked the cave with the blood trail because there were those things watching us from the other cave."

"Did they stay in the other cave?"

"And that's how you got trapped, right."

"Yes, you had to cut your way out.  So what did you learn from that?"

"What did you figure out about marching order?"

"You can't all just stand in a straight line; you have to position yourselves.  [Student] told us to do it and it started working!"

The trip back through the Black Canyon encounter area, crossing the crocodile pool by boat, and the climb up to the ambush ledge via the trailing vines was handled in brief narrative and was uneventful save for an elf noticing that the deadly yellow flowers had begun blooming in profusion where some of the slain explorers had fallen earlier.  Indeed, a little more cautious poking around revealed that the corpse of a dead elf had been drawn up into the mass of vines and was beginning to show signs of budding [foreshadowing!].  The kids of course remembered the Yellow Musk Zombies from their very first encounter, but decided not to risk tangling with the killer vines for now and hurried onward.

The Wall was scaled with relative ease, albeit a great deal of caution, and with the map of Bawal Bayan spread before them, the students got down to the business of choosing their next destination. 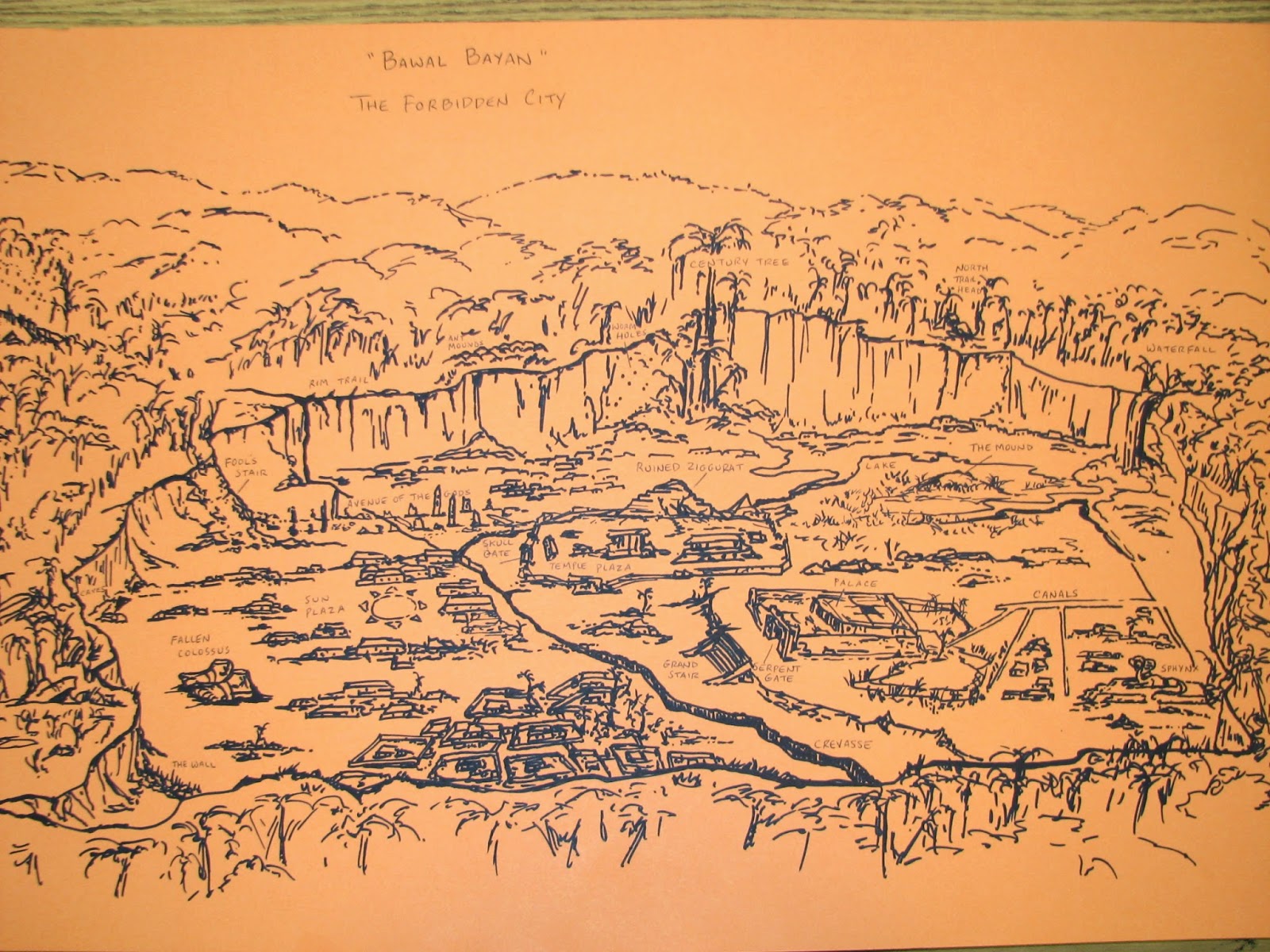 "We should stay away from The Fool's Stair.  The name kind of gives it away.  You can tell something bad will happen there -- maybe you'll fall or there are monsters who push you off."

"The wizard should go ALL the way in the back."

"I think we should stay away from the Caves because of what happened to you all last time."

With both dwarves and the knight arrayed at the front, elves at the flanks, and the wizard ALL the way at the rear, the expedition decided to investigate the Plaza of the Sun.  The students seemed unnerved by how quiet things were at first, though they did notice tufts of pale hair and many strange tracks that looked a bit like the palms of large hands.  They entered one of the low, flat-roofed buildings bordering the plaza and began to search the rubble, but didn't find much of interest save a corroded ring of copper.  The students did remember to have someone watch the rear while they investigated, but soon one of the dwarves grew jumpy:

"I make a bunch of noise.  I bang on my shield with my axe and yell a bunch."

"Okay.  The sound echoes around the inside of the crater and birds take flight in several places.  You hear a sort of barking noise from somewhere far off and some rocks sliding and falling from closer by."

"I shouldn't have done that."

"From somewhere past the plaza there is a bellow and hooting sound -- kind of a 'Wuh-wa-wa-WAH!!' "

"You see something coming this way fast; it's pale in color and pretty big.  When it comes to piles of rubble it just leaps over them."

"I go find a different house to hide in."

"I'll stay at the door and fight it."

"We're splitting up -- we're all gonna get killed!"

Soon a pair of carnivorous white apes appeared, barreling toward the party.  Would they have stopped their charge short to posture and threaten?  We'll never know because, while the knight looked for a better hiding place, the dwarves made their own charge.  The party seemed likely to make short work of the creatures, who couldn't seem to roll a hit until one ape focused its rage on an elf: 19 to hit for 6  points [we roll attacks and damage together to speed things along].

"The ape jerks the elf's arm off, casts it away, and begins slamming the ground with his body."

"I cast a healing spell on him."

"Okay, he's alive and his bleeding has stopped, but he's still missing an arm and the ape is still clutching him."

The other elf promptly drops the ape with a roll of 20.

"There are others coming -- they seem even bigger -- at least six feet at the shoulder when on all fours.  They'll be here in two rounds, what do you want to do?"

"Let's climb up on the roof.  They can't reach us up there."

"There's a tree right there -- and they're monkeys -- of course they can climb."

It was looking like it would be a much more desperate fight, but then the young lady playing the knight chimed in:

The team was on fire and soon routed the remaining apes.  The threat gone, the wizard noticed a strange, greasy tingling sensation when he stared at the huge sun mosaic in the center of the plaza, but after the one-armed elf tossed a rock at it (nothing happened) and the group went to the trouble to fling one of the bodies of the apes atop the ancient tiles (still nothing) they decided to leave that mystery for another time.

From there, the explorers turned their attention to the Avenue of the Gods where they discovered more signs of the apes amid the rows of tottering columns and totemic statues.  A nest was explored and burned, and a little treasure recovered.  The keen-eyed wizard observed something reflective high above in the eye of one of the imposing statues, but no one dared try to climb up and investigate.

As class time wound down, I noticed that we had quietly accumulated four or five onlookers who had finished their other work and come to the table to watch the second expedition's progress.  This is a bit of a reversal: rather than fighting to get and hold the attention of these middle school students, they were coming to us!

With just a few minutes remaining, the group picked its way to the foot of The Fool's Stair where something metallic was observed on the treacherous, dusty heap of scree.  As the rest of the group kept a close eye on some lurking mongrelmen and made plans to sally and chase them away, I was surprised when the one-armed elf decided to dare the climb up the shifting stones to investigate.

"It looks like these are the crushed and half-buried remains of a failed attempt by some other explorers to reach the floor of the crater.  A knight's bent shield and flattened breastplate, sandwiched between stones, reflected the light and caught your attention from down below."

"Is there a sword I can grab?"

"You know what?  Yeah, yeah there is a short sword there."

"I grab it and slide back down."

So, along with the dangers of splitting the party and the importance of watching your back, my students come to the next lesson: Sometimes boldness is rewarded.  I think they are beginning to Learning the Dungeon.
Posted by Jarrett Perdue at Wednesday, May 28, 2014