Here are some quotes I cherry-picked from the written accounts my students created when narrating their first tabletop roleplaying adventure:

"Bawal Bayan, the Forbidden City. A handful of warriors and I were going there to find plenty of loot! There were knights, wizards, dwarves, and elfs ... like me! ... a very talented elf I was. I knew magic and archery!"

Did you pick up on the complex plotline there? Nothing wrong with back story and sophisticated character motivation, but these kids just seemed to intuitively get that this story was about explorers taking risks to win treasure -- nothing more complex required at this stage.


"We entered the Black Canyon and hit a crossroads. One of the dwarves spotted a secret doorway. Almost everyone wanted to go inside; those curious souls. I went [via] the main trail, though there were only a small group of us that went [by] the main route, and I'm glad I did!"

The dungeon teaches some harsh lessons. -- one of them is caution!

"I entered the eastern tunnel with the rest of the group. There were vines, and on top of a shelf were little bat-looking goblins with arrows. As I started to climb the vines, a goblin shot me and I took 6 hit points!"

Ah, the loss of a first character -- a very special moment! This player was a wizard (4 hit points) so the arrow spelled an abrupt end to her career. This student wrote her account 4 days later ... and she still remembered the damage roll! Incidentally, I never identified the attacking critters (tasloi) by name, but just showed an illustration on the Smartboard -- this student settled upon "goblins" on her own.

"I went to investigate the sand, but out of the corner of my eye I saw [a knight] run away. I turned around to see what he ran from and it was a giant praying mantis!"

Again, I never called the enemy an "ankheg"; that would rob the encounter of some of its mystery and reduce player agency (there's power in being able to name things). Also, its just fun to see what players make of various monstrous oddities.

"Our mission was to make it to the crater [wherein] lies the city. Sadly, I died before I got the chance to see if everyone lived to tell this tale, or if the tale died with them ..."

I thought this rather poetic; an elf speaking from beyond the grave. 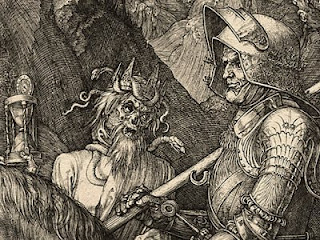 "I followed a few of my fellow comrades past the lake, to the east, into a room with flower demons! Sadly, I was dumb enough to try and move past one, until it sprayed me with its gas and spores. I lay there ... hoping that one of my fellow comrades would come to save the day, but they didn't. Thanks y'all. :) -scene-"

Musk Creepers become "flower demons." I like it! Another hard lesson in dungeon survival -- don't ignore the details. Also, loyalty among middle school kids tends to be thin at very best!
Posted by Jarrett Perdue at Tuesday, May 20, 2014