Dwimmermount: Day of the Slimes

Confession: I have trouble keeping track of my jellies, oozes, and puddings.  Which one splits when hit by an edged weapon and which one grows because of electricity?  Does that one just dissolve organics, or does it corrode metal as well?


Last week, my middle school group broke into level zero of Dwimmermount, unwittingly leaving nice, gaping holes in their wake and paving the way for the first and fourth levels of the dungeon to be overrun by Kitherian slimes from that distant, jungle planet, so I knew that I'd need jellies a'plenty!

Each of the four times that they encountered oozes this session I tossed four six-siders to discover color, diet, and vulnerability.


Once I established results for a particular color, those results became fixed ... the next muddy yellow blob would have the same properties as the previous one ... so that the players could learn from their encounters.

Six explorers and one hireling entered the dungeon, making straight for the stairs down to level two.  Before they even reached the headless statue of Saint Mavors, however, a scummy, brown ooze dropped from the ceiling upon Dilliam, the party's wizard (who was in the front rank of course).  Rather than dissolving his flesh, the beachball-sized thing merely clung to his head, pulsing, bubbling, and stinking like rotten cucumbers.

DM: "Okay, your hands are now stuck to the goop."

Then Salren the Elf decided to help out ...

DM: "Alright, your hand (and hook ... Salren is missing his/her left hand) is now stuck to the goo on the back of Dilliam's head.  Brunhilda the hireling offers to pull it off."

[Brunhilda actually managed to pass her saving throw, so when she became stuck to her employer's head, she managed to yank her hands out of her gauntlets, leaving them dangling across his eyes.]

"Um ... I put the back of my head against the wall and scrape it off."

"Okay ... I put my forehead against the wall and wipe it off that way."

DM: "Alright.  [rolling a wandering monster check] Your forehead is now stuck to the wall."

DM: "It stretches some ... but your neck is really feeling the strain."

"I'm going to reach into Dilliam's pack and take his spellbook.  Do I need to roll?"

DM: "No ... no his hands are stuck to his head and his head is still stuck to the wall."

Salren then asks, "Can I cast Shocking Grasp?"

I had Salren roll for twice the normal damage, but the dice were surprisingly merciful and Dilliam staggered free of the smoking ooze with one hit point left.  I also had him permanently reduce his intelligence by a point and the group trundled merrily onward.

They dodged two other oozes and a strange dripping, bubbling sound before descending to level two.

They did pause to talk about how to sell some orichalcum pannels that they noticed, what they would buy with the money, and who would carry each pannel until Salren eventually pointed out that the panels were bolted to the floor and none of them had any tools with which to pry the bright metal loose.

Down on level two, they explored a half-dozen new rooms, encountering a carrion crawler ("hella-worm" in their lingo) which stunned Salren, and found a cache of ancient Thullian texts.  Eventually happening upon the lab of a physick, the party tried poking random pills into the recumbent elf's mouth until she/he recovered.

Packs full of books, they trekked back up toward the surface, only to encounter another scummy, brown ooze waiting on the ceiling.  Studying their map, the group decided to risk a dash under the slime rather than using their map to circle around to the long way ("We'll go really fast.").

It fell directly on Dilliam of course.

Returning to civilization, the gang was staggered to discover that the tomes and scrolls they had recovered were worth thousands!  At long-last, a princely haul for our battered Dwimmermount delvers.  The resulting experience propelled four of the characters to level two and Jager the Extremely Cautious Elf to level three!

The rest of the session centered on the group slowly realizing that platemail, which they can now finally afford, is awesome!
Posted by Jarrett Perdue at Tuesday, February 28, 2017 No comments: 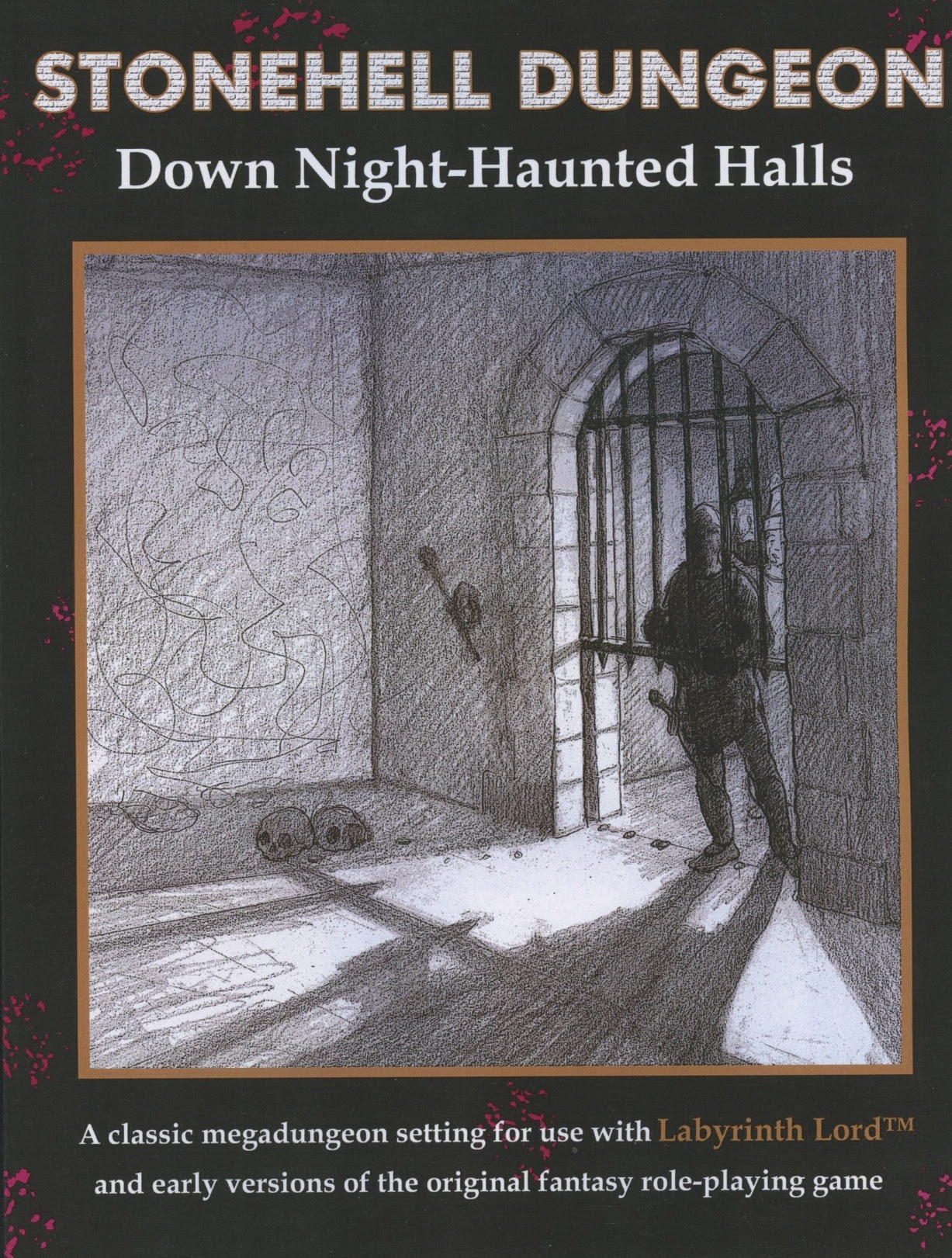 With my younger kid busy preparing for an upcoming ballet, our weekly RPG schedule has been disrupted for a couple months.


My older kid decided that it was time to play the Michael Curtis megadungeon, "Stonehell" until her sister can join us again.

I'm a big Curtis fan since grabbing my copy of The Dungeon Alphabet ... certainly one of the coolest RPG products I've ever purchased.


I started her out with a stack of index cards, and she gleefully rolled up eight characters (3D6 in order).  Stonehell doesn't play nice, so I told her to not bother naming any of them until they reach second level.  Sure enough, despite careful tactics, an unlucky surprise roll saw two of the fighters slain in the very first encounter.

The dungeon runs fast and light compared to the gravitas of Dwimmermount, but isn't any less strange and has a creepier, grimmer vibe.  I've got say that it's a heck of lot easier to run on the fly, with much friendlier organization for the DM (at the cost of some depth, but not atmosphere).

One rule from older editions of D&D that I've never used, nor been interested in, is having dungeon doors stuck fast as a default, requiring an open doors roll to force each new portal discovered.  On a whim, I decided to implement it here in Stonehell where it certainly fit the tone, where the sprawling  layout means that a stubborn door doesn't threaten to end the exploration, and where a decent-sized party is likely to have a few characters with exceptional strength (and a corresponding bonus to their checks to open doors). 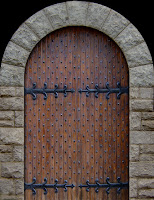 I did permit repeat checks if a character had a suitable tool (I've seen enough actual castle doors to know that a sword isn't going to get the job done) at a one-turn cost in time and a wandering monster check.


I found that the results hit just the right note and made the dungeon feel far more claustrophobic.

Are the doors in your dungeons generally stuck fast?

Have you ever gotten mileage out of this dusty, old rule?
Posted by Jarrett Perdue at Thursday, February 23, 2017 No comments:

While my daughter DMed her first-ever Total Party Kill in another part of the library, eight players crowded around my table today to climb the slime-haunted reaches of the great shaft and batter their way into the hidden uppermost level of Dwimmermount.

They surprised me by leaving Kermit the Fighter behind with a torch to watch their rope and make sure that it didn't get dissolved by slime or that giant spiders didn't climb up behind them to cut off their retreat.

Ferdick (level 1 fighter) guided the group through the red-lit corridors with his characteristic decisiveness, making calls at every intersection as Jager the Elf (level 2) scrambled to keep pace with his map.

Like moth's to a flame, they veered directly toward the first trap marked on my map.  I telegraphed the punch a bit, mentioning strange runes on the frosted, translucent door.  They surprised me with a bit of prudence, back pedalling and showering the door with stones and javelins in an effort to set off any magical trap that might lay on it.

"I'll use Locate Object to try and find some part of the sigil that's more like a trigger than the rest."

I thought that was clever, so I played along a bit.

"Hmm.  Not really clear from your spell, but you think the sigilry is most concentrated around the door's latch mechanism."

They finally decided to shelter out of sight while Jager peeked around the corner and blasted the lock with his Magic Missile.  That certainly registered as tampering in my book ...


Jager's luck held (fully healthy he has only 7 hit points), and he got off with little more than singed eyebrows.

Their risks paid off and in the room beyond they found a sweet spellbook and heaps of old scrolls.  Among the papers there was a log written in High Thullian, recounting the return of a Termaxian expedition from another world -- "When we awoke from the sleep-pods Gorres and Adept Turnus had been reduced to a turbid, green slime ..."

"It's the back-story of the ooze!"

In a final, surprise display of prudence, Ferdick led the party in an immediate reverse march, intent on escaping the dungeon with their gains.


A pair of strange, rolling spheres threatened to cut off their retreat, however, and when speared they released toxic clouds of spores!  The halfling succumbed at once as the pary fled.  Jack the archer, choking and gasping, swooned while descending the rope down to level 1 and tumbled hundreds of feet into the pit below.  Finally, a third PC collapsed at the foot of the rope, wheezed and grew still.

Never one to be swayed by sentiment, Ferdick moved to kick the final victim of the fungal attack down the shaft lest he spread the infection ... but even as his boot met ribs, the sprawled adventurer transformed before his eyes into a shaggy werewolf! [this PC began the game infected with lycanthropy ... we've just been waiting for a triggering event]

A desperate fight erupted at the edge of the pit.  While the other three survivors fled toward the Red Gates, Ferdick and Weird Tree Guy continually stabbed and slashed at the wolf man to no effect, and the lycanthrope snapped and bit wildly.  At the end of the fourth round, Ferdick shield-bashed the werewolf toward the edge, forcing a DEX check.  The wolf man lost its footing and tumbled, howling, down to level four.

We rounded out the session with the crew selling their recovered scrolls and books (they really aren't all that interested in the secret history of Dwimmermount) and several of them finally upgraded their armor to plate!  Ferdick even became the second PC to reach the vaunted heights of level two!

One development none of the players pondered ... they were so successful in breaching "Level Zero," having spent an entire session on the ascent and a single pair of doors, that no thought was spared for what might come slithering out of those red-lit halls to stalk the party upon their return to Dwimmermount.
Posted by Jarrett Perdue at Tuesday, February 21, 2017 No comments: