From Dwimmermount with Love

Our after school Games Club has dwindled a bit to about 25 kids per week as spring sports have kicked in (which is all for the good).


This session our cast included: Last session, with a brilliantly timed natural 20, the party fired a siege crossbow over 200 feet (with cable attached) to penetrate the metallic walls of the uppermost reaches of the Great Shaft.  This dangled before the explorers the temptation of entering a secret level far above.


Over the next hour and a half, the team made five separate trips up the rope to explore the top of the shaft and try to gain access to the doors that they discovered there.

Light proved to be a challenge since no one had a lantern, only torches.

Discovering that nobody had brought a crowbar, iron spikes, or a hammer, the group even trekked back to Muntburg mid-way through to do some shopping.

Amazingly, they even elected to leave two of their number behind to "guard the rope."

By that point Dilliam had suffered some nasty rope-burn when sliding back down to scrape green slime off of his gear and his hands were a pair of mitten-like masses of bandages (making him completely unable to cast spells of course).  This limitation didn't keep him from staying behind, however, and when a crab spider emerged from the shaft he set about trying to kick it to death, earning a bite for his trouble. 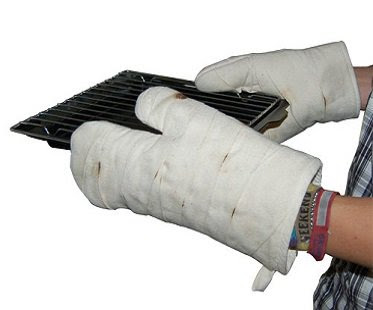 So it was that, when the rest of the party returned after two different giant spider encounters of their own (The Spawn of Arach-naca has returned to The Paths of Mavors in force), they found Dilliam, stripped to the waist, twitching and foaming at the mouth with his flailing hands still looking for all the world like a pair of oversized oven mitts.

"I still have pants on!"

The hapless wizard had made his saving throw, but hovered at death's door for the rest of the session.

Driving spikes along the seam where metal and stone met was also a hurdle, dangling in near-darkness with green slime occasionally detaching from the ceiling to plummet past.  I required a hit roll to be made, with a poor enough roll resulting in the spike bouncing loose.

Two tinderboxes, two torches, and five iron spikes all tumbled down the shaft to level four before the last spike could be set and the door finally accessed.

Some memorable quips and quotes from this session:

It's a little sad that the dungeon level awaiting them beyond those sealed doors is scaled for 5th level characters and I can already hear the death cries of their PCs as they flee back toward the shaft and the waiting rope (unless a slime has dissolved it ... yes ... yes I would), but I know that these guys enjoy their epic failures as much (if not MORE) than their victories.
Posted by Jarrett Perdue at Tuesday, February 14, 2017