As part of our recent silliness with Book of War, my oldest and I decided to do a mash-up with Ticket to Ride ... creating ... Ticket to WAR!

Each side chooses a capital city--in the game below, the Necromancer ruled from Moscow while the living held Paris.

Battalions, represented by single miniatures, spawned from the capital cities at a cost of 5 wild cards.  Battalions could shift from one city to another by playing the necessary train cards to complete that route (e.g. 4 green).

Each turn players could choose to draw two cards or complete a route, just as in a standard game of Ticket to Ride. 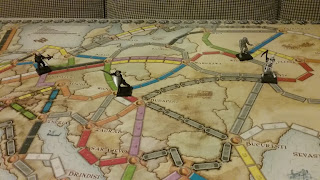 When enemy armies occupied the same city, we would shift scales to table-top war game level and fight the battle out using Book of War.  Retreating forces would be displaced to an adjacent city.
Apparently there is no game, however charming and pacifist in its sensibilities, that the folks at my house cannot transform into a bloody, tooth-and-claw struggle! 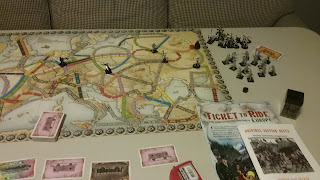 Email ThisBlogThis!Share to TwitterShare to FacebookShare to Pinterest
Labels: Book of War