Since Christmas break, I've continued to pick away at Olde School Wizardry: The Nine Ancient Runes of Magic, my all-wizard homebrew RPG (and the game that gives this blog its name).

Whenever I thumb through a new RPG, I immediately gravitate toward any chapter dedicated to scenarios ... for me, that's where "the good stuff" is at ... so I knew that I wanted the final chapter of my pet-project (which contains nine short adventures) to be rambly, eclectic, and exactly the sort of nonsense that I hope to find.

Leaping Lupsbach or The Big Catch --  A Remote, Rustic Roundup 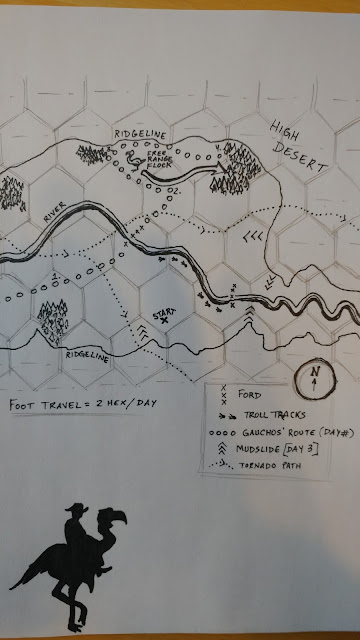 Duke Standij Groant wants to strengthen his prized lupsbach stable with an infusion of fresh blood, and to this end he has directed Corbel Shewn, his court wizard, to secure several wild birds for breeding stock.

Shewn, a portal mage, subcontracts with the young wizards to help him complete the task.

Having used the Divine Rune to identify a far, western valley, well beyond the borders of most maps, where a few wild lupsbach still roam, he will open a temporary portal to allow the wizards to travel there and capture as many of the great, flightless birds as they can.

The "wild" birds of the valley are actually part of a free-range flock managed by bird-riding gauchos, so the wizards may end up becoming rustlers quite by accident.

A congregation of river trolls also has designs on the flock, and the arrival of a violent storm out in "big sky country" will add to the complications. All in all, the neophyte wizards will have their hands full.
Posted by Jarrett Perdue at Saturday, February 11, 2017