About a month ago, my older daughter and I played a half-dozen sessions of Book of War, by Daniel "Delta" Collins, as part of a linked campaign set in "The Realm"--our D&D campaign milleau.


Her younger sister acted as judge as we used blind movement to shift our troops around a hex map, probing, retreating, and attempting to draw our foe into the battle of our choosing.

I played three human barons, their knights, soldiers, peasant levee, and human mercenaries, while my daughter commanded heaps of goblins, orcs, and wargs led by ogres, a minotaur, and a half-orc warlord (sent against the kingdom as mercenaries in the employ of the Master of the desert nomads).  Most fierce among her troops were her wolf-riding goblin archers, who could dash, loose arrows, and dash again, dancing out of range of my slower troops.


What made this campaign especially exciting was the shared continuity with our six-year-old D&D campaign.  If Baron Sherlane was pulled from his horse and crushed by ogres ... well, he wouldn't be around to act as the characters' patron any longer!  Likewise, if the eastern side of The Realm was overrun and its folk put to the sword by marauders, the PCs could lose homes, friends, and loved ones in our linked RPG.  We were playing for keeps!

The final results were most satisfying.  We each won two engagements (one large, one small) and rather than one faction being thoroughly broken, each of us were bloodied enough to withdraw to better ground and send out scouts--a stalemate.

What this means for our campaign world is that The Wildwood Inn, that walled compound and last bastion of civilization in the wide eastern forest, was overrun with fell folk and has become a stronghold of goblins and worse. 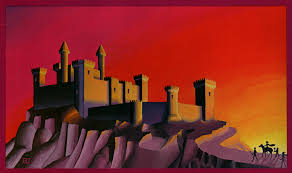 Further north, The Old Forest Road has been cut, further isolating Castellan's Keep where it stands upon the very border of the wild.


The barons must set a constant watch upon the margins of the wood as goblins and wolves slink out by night to terrorize isolated hamlets and many farms are abandoned as folk flee west toward safety.

These developments clearly spark adventure for our heroes!


What mass combat systems have you tried over the years and have you settled on a favorite?
Anyone else out there ever tried Book of War?

Email ThisBlogThis!Share to TwitterShare to FacebookShare to Pinterest
Labels: Book of War, Homeguard