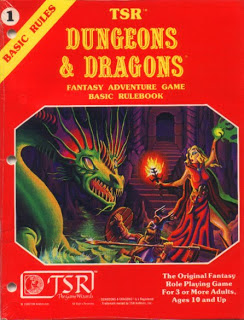 One of my favorite sections in my beloved Moldvay 1981 D&D set was the brief, but rock-solid section on adventure design.  If you have any interest in running role-playing games and you don't yet own a copy, $5 will get you a legal download through Drive Thru RPG.  Even seen through the warm glow of decades of nostalgia, pages B51-52 are some of the most clear, unadorned, and functional guidance on adventure design I've read in 30+ years of tabletop gaming.  Along with the simple d6 chart for random dungeon stocking (which I continued to use well after I'd moved on to other game systems), the entry under Step A. "CHOOSE A SCENARIO" continued to be an excellent springboard for ideas:
"A scenario is a background theme or idea which ties the dungeon together.  A scenario will help keep a dungeon from becoming a boring repetition of 'open the door, kill the monster, take the treasure'. A good scenario always gives the players a reason for adventuring.  The DM should also design a dungeon for the levels of characters who will be playing in it.  A good scenario will also give the DM a reason for choosing specific monsters and treasures to put in the dungeon.  A scenario may be anything the DM can imagine.  To help new DMs, some common scenarios are listed below and explained.  The DM can fill in the details."

He lists ten scenarios (numbered so you could roll your d10!) including "Exploring the Unknown," "Escaping from Enemies," and "Finding a Lost Race."  Did you notice that he said a good scenario is one that gives the players a reason for adventuring?  That wasn't a misstep -- Tom isn't talking about in-character motivation or plot railroads, but is speaking as one magician to another as if to say, "Show them a new trick; something they've never seen before.  Make it something that will surprise and wow them!"

Each of the ten entries gets a short (2-4 sentence) open-ended treatment and three TSR modules from the B-series are listed as examples (though it would be decades before I ever saw two of them in print).

When writing instructions for the scenario design activity in my Adventure Games Class I went straight to Moldvay for inspiration:

HOW TO CREATE A LOCATION­-BASED ADVENTURE SETTING

● Exploration: hired to explore and map unknown territory
● Enemy Stronghold: find it, enter it, discover & possibly neutralize the enemy plans
● Establish Basecamp: clear an area of danger, making it safe for rest and resupply
● Destroy Ancient Evil: find it and defeat it before it can complete its plans
● Lost Shrine: to remove curse or recover sacred item, follow clues to locate the shrine
● Escape: characters begin as captives and must escape
● Rescue: recover the captives for honor or reward
● The Cure: characters have been cursed/diseased; follow clues to find the cure or perish.

More recently, I was thinking in minimalist terms and wondering if the very core of a scenario could be reduced to a single verb.  Here's what I came up with:

I'd love to have a full set of ten (so I could toss a die of course).
What am I missing?  Help me out!

From there, a second quick roll can give us the rest of the scenario's skeleton:

7, 3 = Escape, Book.  Okay, this is something I can work with!  The characters' enemy, Lord Volde-snake, is back from the dead and has written a memoir revealing the weaknesses and secrets of the characters, making them appear to be black-hearted, puppy-eating villains of the worst sort.  Along with some "evidence" planted by the villain's old lackey, Brown Jenkin, the characters are presumed guilty and must flee their former friends and the Anti-Quotidian Quartet (ideally without killing anyone), find the real culprit, and clear their names! 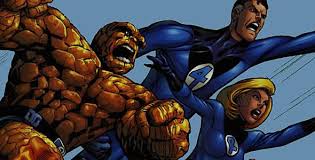 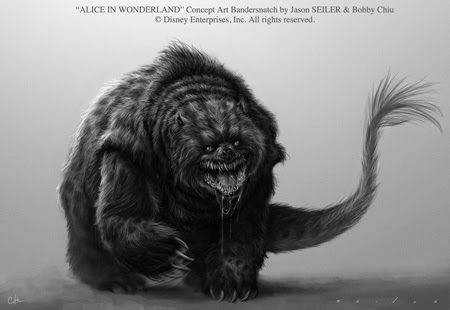 How about 4, 5?         Locate, Monster.           Yeah, that'll work too.  With a strange transmogrifying plague beginning to strike down the great and meek alike, turning them into vile marrow-eaters, an ancient source of lore suggests that only the venom of the Greater Frumiated Bandersnatch can be used to concoct a cure!  And whence the Bandersnatch?  All but extinct, the last specimens are rumored to lurk in the heavily warded pleasure gardens of the Mad Sultan Gul'ltaan, Lord of the Nine Sword Golems of Tuur!

The Big List of RPG Plots by the inestimable S. John Ross is another excellent source of low-input / high-yield triggers for developing scenarios on the go and is well worth a look, whether creating role-playing, comics, or short stories are your particular thing. 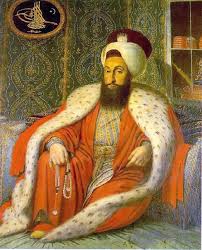