So now I'm gaming up to three hours a day in school -- that's awesome -- but one downside of school starting back up is that there won't be much time for my own kids and their friends to get together for our Home Guard B/X D&D campaign.  We'll be lucky to get one game in a month.

Recently, recognizing that it would probably be our last session of the summer, I grabbed some tape and construction paper to throw together this cliff face, narrow trail, and geyser-field (complete with savage reptile-men), setting it up on the dining room table for my kids to find at breakfast time.

That simple little visual hook pulled the girls right in.

"No dad, you put Sarah in the back.  She's supposed to be up front, remember?"

Soon enough they were battling monsters, rolling saving throws as the geysers spat scalding water, and (at long last) stumbling upon the secret "back door" that the wizard had used to escape from the third dungeon level under The Hill.  They checked the wizard's lengthy written account again (written in cursive to give them something to decode), confirming that they were very close to where he had reported seeing a huge mound of treasure.

"It's either an illusion, or trapped, or there's a dragon," my oldest declared with a certainty that positively would not be shaken.

"Probably there's a dragon and we'll all get killed because I don't think first and second level characters can handle a dragon."

"Well, there's Aerick and he's fourth, but everyone else is first and second level."

"How many hit points does a dragon have?"

"It's most likely a red dragon because of all the steam and hot stuff.  We definitely couldn't handle a red dragon."

So the session ended with the party lingering just inside the mouth of the broad tunnel, thick, hot, fumes blowing up into their faces from somewhere deep, deep below ... and then on Sunday we went to The Riverside Center to see a five-man production of The Hobbit.

The kids have now set aside any notion that the rumored treasure might be an illusion, trapped, or merely a lie and the conversation has turned to how one might set about getting hold of a black arrow.

"If we had like fifteen elves and they all had magic missile and they all cast it at the same time would that be enough to kill it?"

Hmm ... perhaps this would be the perfect time to drop a rumor about a certain elf princess ... 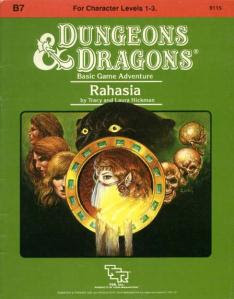