My Homeguard B/X campaigners have been chopping away all summer at the classic (and deeply flawed) Horror on the Hill. After pounding hobgoblins (and a couple trolls) over and over, rescuing a dwarf from the clutches of a goblin king pretty clearly inspired by The Hobbit, and discovering the location of the mystical fountain, the kids became restless and decided that if the rumors they had heard back at the fort of a dragon sleeping under the hill were true, then a critter that size would need a pretty big hole ... In fact, it meant that there must be a backdoor (again, The Hobbit).

There is of course, and bypassing all the messiness of a labyrinth on level three and more danger and attrition on level four to go instead directly to the biggest possible treasure just makes sound tactical dungeon-sense ... so it should come as no surprise to readers of classic era products that the module's writer doesn't really emphasize this option ... it just isn't part of the plot train he intends the players to ride.

When the kids got serious about finding the back door I secretly cheered their good tactical sense, but was determined to make them work for it! There was a week of surveying to crisscross the entire eponymous hill, wandering monsters, food and climbing supplies to purchase, frequent danger from boiling geysers, and no guarantee of success. When they finally discovered the door they were stymied for a while by the illusion that cloaked it, but elated when they at long last set foot in the hidden tunnel.

Then a realization began to settle in ... If the backdoor was real, does that mean that the dragon is real too? Were they really ready to dare the darkness to find out?

Our latest session then was something new for my elementary-aged players ... A council meeting to plan just what to do about their discovery.

"We should warn all the people of the fort to start evacuating."
"All the women and kids."
"What if it isn't a dragon but it's some other big monster?"
"We need to do some research and find out its weak spot!"
"If we get a whole bunch of elves together and they all learn magic missile maybe we can kill it."
"I'm going to run. I want to be far away when it attacks. In some other town."
"But what if it comes there?"
"I'm going to retire."
"But we don't even know if there is a dragon!"
"Okay, I'll fight it, but I'm going to be WAY in the back." 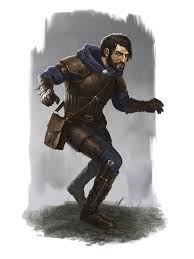 Finally it was decided that Mitchell the Thief, using the party's very last dose of invisibility potion, would dare the tunnel to see what lay below.

The table was so tense that there was nervous squealing and laughter as the thief padded down into the dark, keeping one hand on the wall and not daring a light until he could hear the sound of breathing. Darn if his player didn't roll a perfect 1% on the Move Silently roll ... At last, a tiny ray of light from a shuttered lantern revealed a floor carpeted with gold and a set of wicked six-inch claws sprouting from a blood red foot! 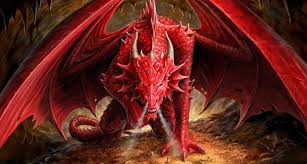 One player shrieked loud enough to wake my wife while another, though she's never seen the movies, groaned in classic Indiana Jones style:

"RED!? Why does our very first dragon have to be RED?!"

Red dragons, even young ones, as anyone can tell you, are the fiercest and most terrible of their wicked kind. How will the kids deal with (or escape) so terrible a foe?

You never forget your first dragon of course, so it is bound to be memorable no matter the outcome.

What was your first encounter with a dragon like?