Lost Mine of Phandelver - Thoughts after my 3rd session

Yesterday I ran my third by-the-book session D&D "5th edition" for five of my middle school students (all of whom had some game experience -- mostly console).

The scene opened with our small band of swords-for-hire (they established pretty quickly that they are NOT heroes) huddled in the woods east of the village of Phandalin, licking their wounds after picking a fight with the Redbrands, a local gang of ruffians. 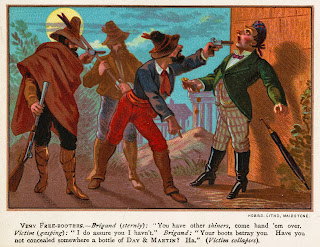 Despite one character having been K.O.ed the prior session, I watched warily as hit dice and a healing spell quickly brought the party up to full fighting strength.  I enjoy the resource-management of classic dungeon crawls and wondered if the rapid recovery of the new rules set would undermine that aspect of the game.  I wondered if there were any real consequences from one set-piece battle to the next or if that tactical approach was gone for good.

The players debated whether to return to The Sleeping Giant taphouse to confront the brigands again or to get out of town while they still could.  In the end, however, one of them noticed the ruined manor house just outside of the village and they abruptly decided to go check it out in hopes of finding some treasure.  I hadn't mentioned the manor ... they just got it in their heads that it would be cool.

Again I was struck by how my players seemed naturally drawn "off script" -- something I'm fine with, but how will DMs new to the game handle it with advice on that front largely absent from the new Starter Set?

As they cut branches to hide their (stolen) ox cart, I had the players roll a DC 20 Perception check, and sure enough, the fighter of noble birth noticed a draft coming from the well-hidden secret tunnel that led to the dungeon below the manor.  The players were adamant that someone stay behind to guard the hidden cart and watch the tunnel mouth, and, in a bizarre tactical choice, both the elven wizard and dwarven cleric were nominated.  Led by a halfling, the human stumbled off into the dark tunnel ... and right into an encounter with a nasty monster!

I was a bit leery of the critter's 45 hit points, two attacks per round, and special attack (which I believe dealt 3d6 damage) but kept my resolve to let things play out by-the-book: 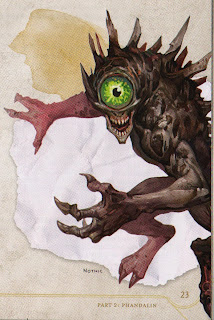 Following the voice in his head, the noble fighter peered around a stone column and was slashed deeply across the face with a claw attack.  The rustic fighter dashed over to defend his friend, but couldn't land a hit and watched as the thing's nasty gaze-attack dropped his comrade in his tracks.  The halfling, who had been scouting off to one side, slipped in to make a sneak attack from around the column, but also failed to land a telling blow and was also felled with a single attack.  Having heard the cries, the dwarf barreled into range on round three and unleashed what to me looked like a hideously over-powered 4d6 attack spell on the beastie, followed a second later by a critical from the remaining fighter's greatsword which severed one of the thing's arms Beowulf-style.  The monster, spraying gore, broke from combat and fled.

Imagine that!  Far from a mere tabletop tribute to video game button-mashing, we had a genuine combat in which tactics (particularly the party's poor ones) mattered and in which two of the five PCs were taken out in the first encounter!  No hand holding here!

We ended the session with the Redbrands, roused from their secret hideout by the sounds of combat, raising the hew and cry and closing in on the party.

I was surprised to see how what had initially looked to me like grossly inflated hit points and healing rates worked in a neat symmetry with truly nasty opponents and high damage totals.  It all works very nicely and has a very exciting feel -- this is indeed D&D as I remember it -- though I will say that it feels like the new level one is the equivalent of the old level five.

Among the best things that the new rules offer are the death saves.  I grew up with 0 hit points = dead = bored and switched over w/ the DM's Guide to -10 hit points = dead with the character losing a hit point each round they were at or below zero.  The new death save sub-system suits me much better, mainly because it gives the dying character something really interesting to do each round.

My players are hooked and I'm eager to see how this plays out ... My only misgiving at this point is the time and complexity of character generation when it comes time to back-fill for the inevitable casualties.
Posted by Jarrett Perdue at Wednesday, September 24, 2014