Working our way through a stack of classic TSR adventure modules, some players in my Homeguard B/X campaign recently tackled (B3) Palace of the Silver Princess by Jean Wells and Tom Moldvay. 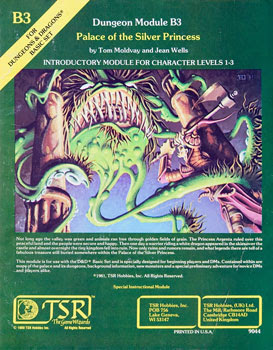 We opened with the level 1-3 party (2 elves, 2 halfling-thieves, and a magic-user) wandering eastward in search of some way to pass over the border and beyond The Fields We Know and into our campaign world's Lord Dunsany-style Elfland.  The aim of their quest was to find a way to bring a fallen elf comrade, Sayana, who had been incinerated by a dragon, back to life.

Instead they were met on the road by Thendara, immortal guardian of the once-verdant valley of Haven.  If the group agreed to be transported to Thendara's world and rescue a princess in peril, she would consent to guide them to Elvenhome.

I replaced offscreen antagonist "Arik" with Orcus, since the characters had tangled with his goons before in both (B2) Keep on the Borderlands and (H1) Keep on the Shadowfell, and played up the undead / corruption angle as Haven decayed under the malicious power of a bloody red glow.

Our first session was pretty pedestrian (the standard skeletons, giant rats, traps, secret doors, etc) but, having had no luck finding their way up into the higher reaches of the afflicted palace, the party withdrew to the gated courtyard where they had begun their exploration.

It was at the opening of our second session that one of my eight-year-old players flexed her creative muscles.  "If we can't find stairs going up, can't we just climb up onto the roof or something?"  Hunh.  That was some pretty sweet asymmetrical thinking there.  I was clear about the consequences of a tumble down to the flagstone courtyard would be grim (2d6 damage) and that I would require at least two climbing checks, but the players were sold on the idea and the dice were hot.  Soon a rope was carefully tied off and the party ascended to the partially-destroyed upper level of the palace, neatly bypassing a dozen encounters with the traps and monsters below.

I was determined to be fair, but not to make this a cake-walk:


They chose quickly, decisively, and luck was again on their side.  Soon Mary the halfling was rappelling down the wall of the palace's huge garden, but when a twisted "archer bush" spat thorns at her she retreated back to the rooftops.  From there, though additional saving throws against the red doom were required, volley after volley of archery fire reduced the vegetable horrors below to so much pulp.

Though there was a tense moment with a wandering medusa (the front rank made their saves, Mary always carries a mirror, and the creature fell victim to its own gaze), soon the adventurers found their way to the chamber of the evil priest and the ruby blade that he was carefully preparing for the infernal champion that Orcus would soon send forth from The Pit.

A combo of three Sleep Spells and a well placed Charm Person (the priest rolled a 6 for his save) and the party swiftly dispatched or neutralized the defenders (including a werewolf).  Charlotte the level two magic-user led the way into the Great Hall where she promptly smashed the cursed gem with the ruby sword and delivered Haven from its curse!


These guys really played the tactical game beautifully -- there were no flashy heroics here and if they perceived that a fight might be "fair" they were quick to retreat and look for an advantage or another alternative.  Sniping from beyond range, setting ambush, avoiding pitched battle, and making every possible use of the Sleep Spells really typified this approach.  I was really proud of them for making such short work of the opposition.


Then again, I've always had a strong bias toward a tactical approach in my games.

Do you prefer to approach your fire-breathing reptile games with the cool eye of a wargamer looking for maximum advantage at minimum risk, or do you prefer a more sanguine style where you are willing to take big gambles in hopes of capturing that epic butt-kicking moment?