When I last posted about this campaign ... 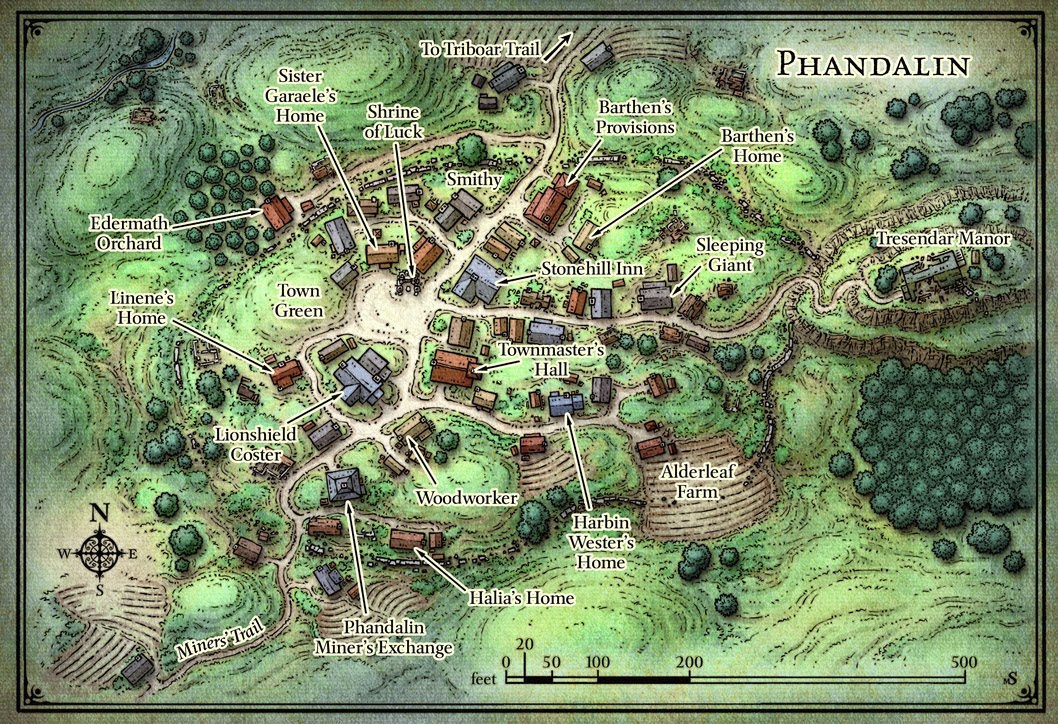 The party's dwarven cleric had just been cursed by the ghost of his master, Sildar Hallwinter, while looting his corpse and the gang found out the hard way that they were unemployed.

What are a pair of down-on-their-luck dwarves, a shy elf, an attack-hobbit and their pet goblin to do?

Head to Phandalin of course!


After alienating a few of the locals, pondering an indecipherable sign, and trying the inevitable "rob the shop" caper, the gang eventually found their way to the Shrine of Luck on the village square.

Some ham-handed flirting with the priestess followed, after which the lads were, for a small donation, permitted to spin the "wheel of luck" to try and earn the favor of The Lady.  They managed to negotiate for the removal of the curse and a bargain was struck: if the adventurers journeyed to the ruins of the village of Conyberry to inquire of a dangerous hag about the location of a long-lost spellbook, the priestess would petition The Lady to remove the curse on the dwarf.

Two days east down the Triboar Trail the crew stumbled across a pack of vicious gray-skinned, undead scavengers feasting on the remains of an owlbear carcass (slain by our last batch of PCs prior to their TPK by orcs).

The party scattered and hilarity ensued amid the maze of bracken and tall grass.  Only Isaac's shy elf could out-pace the undead so the dwarves and halfling dashed back and forth with slavering dead constantly clawing at them (Ted the goblin just climbed a tree to wait things out).

Eventually the creatures were destroyed or scattered with a little help from a traveling wizard, though sadly the dwarven fighter was messily eaten before all was done.

The trip to the lair of the hag was continued without further event and the party did a nice job of remembering to set watches while camping in the ruins of Conyberry.

Upon meeting the hag herself and offering the gift they were sent to deliver, I was a little surprised when the gang decided to stick to the plan and ask about the lost spellbook.  As notes were jotted, the halfling attempted a bit more half-hearted flirting and the group withdrew and headed back to Phandalin where the priestess had ample time to prepare a Remove Curse spell for the afflicted dwarf.

As the group geared up to head out to Wyvern Tor and take advantage of the recent bounty on orcs, they were confronted in the street by a group of thuggish Redbrands, the local gang of ruffians who had been making life hard for the residents of Phandalin.

Rather than be bullied, the adventurers immediately threw down and a wild west-style running fight erupted in the muddy little lanes of the town.  While Ted hid out in an alley, Shy-elf and and the attack-halfling peppered the thugs with arrows, carefully keeping their distance.  A bit of poor dice luck saw the dwarven cleric detonating a local outhouse rather than blasting his foes and falling under the clubs of the ruffians.  By this point the archery had done its work and the villains fled back to their hideout at the old ruined manor on the east end of town.


No time was spared for mourning and thoughts of pursuing the orcs were put aside as the surviving party-members began planning their revenge over the following days.  They spoke to the proprietor of the Stonehill Inn, no friend of the gang, and secured a back storeroom in which to meet and plot.

When news came that the Alderleaf farm was on fire, the adventurers hurried to the scene.  Sure enough, the Redbrands had set the halfling farm ablaze and had put out word that, at least in their eyes, demi-humans are no longer welcome in town.  Attack-halfling spoke to widow Alderleaf and another confederate was soon enlisted in the effort to end the Redbrand menace.

This week we'll see if the adventurers, who are weaker than their enemies man-to-man, can use guile and ambush to deal with the Redbrands once and for all!