Monday marks the start of my two-week summer games camp.  It works a bit like a class and a bit like a games convention where there are always 4-5 games running at any given time and students pick where to play to earn points for their team.

My older kid will join me for the first half to run some D&D before heading off on a church mission trip (something you probably won't find in that Jack Chick tract from the 80s).

Since most students don't have any experience playing table-top RPGs, we aim to keep things as simple and intuitive as possible, borrowing from Holmes Basic for some things (e.g. standard hit dice & weapon damage), Mentzer Basic as the core game, and a few elements from later editions (ascending AC and the concept of advantage/disadvantage).

Miniatures help many young players bridge the gap a bit too, so this year I'll set them up with some inexpensive plastic knights based on 1.5" wooden disks for stability. 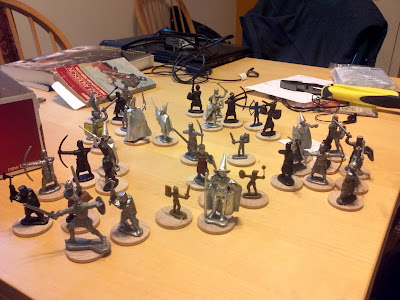 No fancy paint jobs ... but then again these minis will probably get knocked around a good bit too.  Chess pieces will stand in for various monsters and mapping will take place on a 3' x 2.5' pad.

We're looking forward to it and I'll probably post more about this year's events after the dust settles.