Racing Goats of the Cramanthain!

This week I wrapped up my annual, two week Adventure Games Camp, hosted by my district at a local high school.  Some highlights: 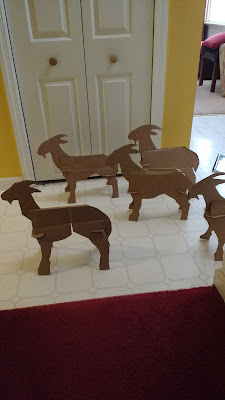 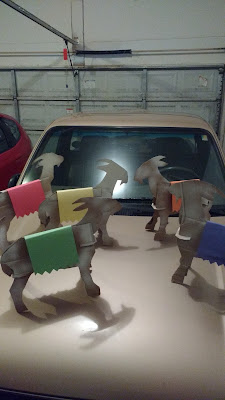 These beauties have been fitted with their clan caparisons (which would be in tartan if I had the time to do it properly) and are ready for the truck ride to the big race!

The actual race was a physical / dexterity game in which we laid out a course (a circuit of about 250-300 feet).  The steps were simple: 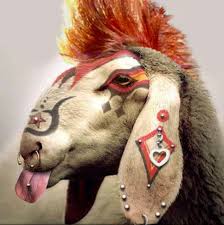 Ah ... but the strategy and sneakiness involved!  If I throw my bag to knock the disc away from other bags then I can potentially cancel another team's advance.  Likewise, sometimes it pays to toss my bag backward at a closer opponent's disc and try for two strides rather than chance a longer toss at my own disc.  Add to that the basic trade-off of whether to risk a long throw with the disc (and a possible miss, meaning a turn spent at a standstill) or a wimpy, little throw that you are virtually guaranteed to make but which only moves you a short distance forward, and quite a lot of strategy is involved.

So ... a really busy but exhilarating couple of weeks.


I wonder if I'll be able to apply that success back in the general educational setting absent those advantages.
Posted by Jarrett Perdue at Saturday, July 23, 2016