While I mostly write about my B/X Homeguard campaign or my 5th edition Dwimmermount game, the truth is that the campaign that I put the most time and energy into is actually “Olde School Wizardry,” my homebrew, heartbreaker, all-wizard RPG.  Playing twice a month for about five years now, some amazing, dedicated players have helped develop a rich, imaginary world with dozens of plots, memorable settings, and over a hundred NPCs.

Last Friday night was no exception.  Here's a snapshot of the kind of nonsense we get into ...

Grandmaster Thoe of the Revered and Ancient Order of Smithies and Artificers was blown to bits in broad daylight right on a busy Eas’side Avenue in the Walvian capital of Dundrin-on-Clye.  The assassins were believed to be agents of the dastardly Bhatvian Overmarshal.

Foremost among the Artificers, whose order rose to such prominence after the decisive role their steam-powered contraptions played in the Stork Islands War, Thoe was a dedicated critic of organized wizardry, and it was considered a great coup when the Archduke’s Duckpond Council saw fit to award him title to Whitegull Keep, the ancestral home of wizardry and the Collegium Mysterium.

More recently, when Grandmaster Thoe was appointed Provisional Governor of the client city-state of Parleth, a clandestine investigation by wizards Mikhail Put, Dwitegmore Vart, and Bron Yuuk (three PCs, recently returned from the distant past) revealed that he was secretly working with Bhatvia on a grand scheme (code named “Brand’s Hammer") to overthrow the Walvian Archduke.

Aboard the pleasure barge of reclusive Judex Mellard Bentbrock, a recently pardoned and reformed “cabalist” (a wizard who advocates the overthrow of mundane modes of governance and the institution of a universal magocracy), while running the gauntlet of Bentbrocks lackeys, flesh-shaped goblins, and gynunculi (lumbering, boneless, meat-women) wizards Put, Fwippit, and Vart were more than a little surprised to stumble across Thoe, who didn’t seem to recognize them despite their recent encounter with him.


Gaining audience with the hedonistic Bentbrock, ostensibly to secure his patronage for a newly produced line of bottled, magical, intoxication-inducing fogs, the Put and Vart actually intended to question him regarding the whereabouts of "Grom's Blasphemy," a hastily scrawled magical sigil that may constitute the only known sample of "Auld Science" (the arcane potential to manipulate the cruel, psychic, elfin overlord race of which only a single member is known to still exist).


In order to offer Bentbrock something in exchange for information they sought, the young wizards had planned to give Judex Bentbrock details on Grandmaster Thoe's duplicity, but they certainly hadn't expected to find the prestigious artificer and staunch critic of wizards everywhere enjoying Bentbrock's own hospitality!

When the investigators probed a bit, to the effect of ... "So you must already know about Thoe's secret dealings.  There are plenty of people who would be very unhappy if they found out what he was up to.  In fact, there are those in the Estates Arcanum who would be most pleased to see you take Thoe's seat on the Duckpond Council should Thoe lose his place," Bentbrock replied with a surprising non sequitur, intimating that, though apparently his guest, Thoe wasn’t “long for this world.” 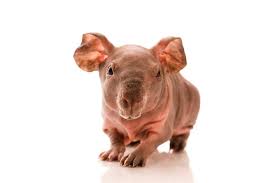 Bentbrock agreed to give the young wizards details on where to seek Grom's Blasphemy (on the Bhatvian-held island of Medeherenz, one of Bentbrock's former secret lairs) in exchange for returning a few items that he had left behind when he fled the place: a magical cauldron, a favorite pair of studded pajamas, and the collar of Lord Puggles his original fleshy bear (meanwhile Lord Puggles #2 was  busy making amorous advances upon young Fwippit's leg).


The wizards hastily took their leave of the corpulent Judex, spotting Thoe on their way off of the barge.  This time Thoe immediately recognized them, and the senior artificer fled from the investigators in a panic.  For their part, the wizards made no effort to pursue, surmising that Thoe was under Bentbrock's protection. 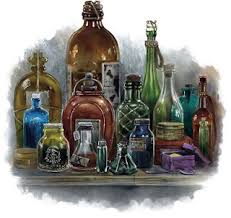 After spending a week creating a new batch of intoxicating, bottled vapors ("Fwippit's Fabulous Fruity Fogs"), and an unpleasant encounter with Knuckles Nokk (one of Bentbrock's lackeys) and a pair of his enforcers who were none too happy about being cut out of a deal to sell these to the Judex, the Vart, Put and friends prepared to depart Dundrin-on-Clye for far northern Medeherenz.

Before they could leave the city, however, urgent news arrived: Grandmaster Thoe had been killed right in the city while en route to a meeting of the Archduke's Duckpond Council.  If Bhatvia was behind the assassination, as most patriotic Walvians naturally assumed, this could mean that a declaration of war was imminent!

So that's a small glimpse into what our regular sessions of Olde School Wizardry look like!
Posted by Jarrett Perdue at Friday, February 05, 2016