A blizzard and a smaller snowstorm closed schools and disrupted the group's weekly crawl through Dwimmermount, but with warmer weather arriving we started making up for lost time this week.

Our cast for this session: 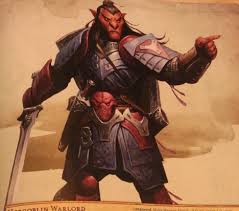 Vale's player couldn't stay after school, leaving the party in somewhat tricky spot ...
Last time she had successfully negotiated with "Thaddeus IV," leader of a band of a half-dozen, heavily armed, upraised goblin shock troops, avoiding a nasty fight that the adventurers might not have been able to win.  Thaddeus IV revealed that his squad had been charged with helping scout and secure this level of the dungeon, bringing back to their centurion anything of interest.  The goblins agreed to accompany the explorers for the time being, but continued cooperation depended largely on Vale's ability to communicate with the goblins (nobody else could speak their ancient, low Thulian argot), her player's quick thinking, and Vale's Charisma score of 17. 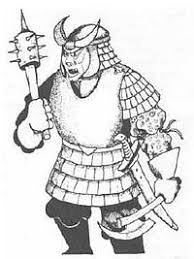 With Vale out of the mix (we decided that she had returned to the surface with NPC party, The Seekers), things quickly grew tense between the two groups.  As a few rooms were searched, it became clear that these big, red-skinned goblins were contemptuous of the treasure hunters, not particularly inclined to share any treasure that was discovered, but willing to let them take the risks of opening doors, checking for traps, and leading the marching order.

Things came to a head when Y'draneal opened a long-disused door and triggered an attack by a group of eldritch bones, the glossy, black, azoth-infused, skeletal guardians of the mountain.  He was just barely able to slip past the goblins before they closed ranks and locked shields, blocking the corridor and trapping Yang and Hurtis at the front, face-to-face with the fearless enemy!

The fighters eventually prevailed, learning that Yang's morning star was far more effective at shattering the bones than Hurtis's spear-thrusts, but both men were battered and spent by the end of the fight (each had to use Second Wind and their Action Surge to stay on their feet).

As the over-sized goblins shouldered past the victors and set about searching for spoils the players realized that this relationship just wasn't going to work!
In the next room, the chambers of some long-dead Termaxian wizard, Yang discovered two chests and even though he had been quite cautious and disciplined about checking for traps up to that point, he forgot himself in his eagerness and fell victim to a poisoned needle on the latch of the first chest.

When the goblins saw that Yang wasn't going to die immediately (though his limbs became stiff and his breathing shallow as he clung to consciousness), they insisted that he open the second chest as well ... reasoning that he was probably a dead man anyway.  A fair sized trove of silver was discovered and Thaddeus IV soon set about consolidating it and assigning two of his goblins to carry off the chest.

Meanwhile a secret door was discovered, along with a stash of food and drink in strange containers which seemed to defy the passing of years, and the withered corpse of the Termaxian mage who had made this corner of the dungeon his final hideout.

Y'draneal: [labeling his map] "We can call it Secret Base Gamma!"

Keeping this new discovery from the goblins just wasn't going to work however, and Thaddeus IV became even more excited over the cache of food than the silver.
As the goblins systematically opened and checked each container, a thought struck Y'draneal: he's extremely stealthy, reasonably strong and only two goblins were lingering behind as rear guard ... what if he grabbed the chest of silver and made a dash for it?  His thief skills would let him disengage from combat as a bonus action and his elven speed would give him an edge over any pursuit ... all he would need is a distraction ...

Ivor: "I'll point at Yang [currently writhing on the floor] and laugh."
DM: "The two goblins are watching him with interest and seem to be making a wager as to how quickly he dies."
Ivor: "I poke him with my spear a bit."
Y'draneal: [rolling a stealth check] "I'm going for it."

Y'draneal's roll came to a modified 20, enough to let him slip from the room without tipping the chest and making the coins shift.  Using his elven eyes to guide him through the dark, he was off like a flash, legging it back to the steps that led up to the dungeon's first level.
DM: [making a wandering monster check] "Are you waiting at the stairs for the others to catch up?"
Y'draneal: "No, I'm just going."
Yang: "Can you carve in the wall in thieves' cant, 'Here lies Yang?' "
Y'draneal: "No. I don't think there's a word for that."

In the end, after exchanging coins in Muntburg, the haul ended up coming out to about 100 gp each ...

"Ivor: "100 gold and we lost Yang, made the goblins mad, and made The Seekers mad too." [Yang was technically one of their henchmen]

Classic Moment: After looting a room, the large passageway that the group is following turns southeast rather than continuing in a cardinal direction ... 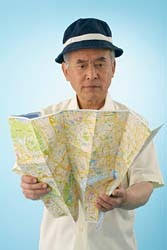