At first the map had only three or four locations, matching our very first adventures -- Quasqueton (from B1), Threshold, and Castellan's Keep and the Caves of Chaos (from Keep on the Borderlands).

As months rolled by, we soon added the Shrine of the Sacred Spring (from a homebrew adventure and the twin of the magic fountain in B5) and Kelvin Town. 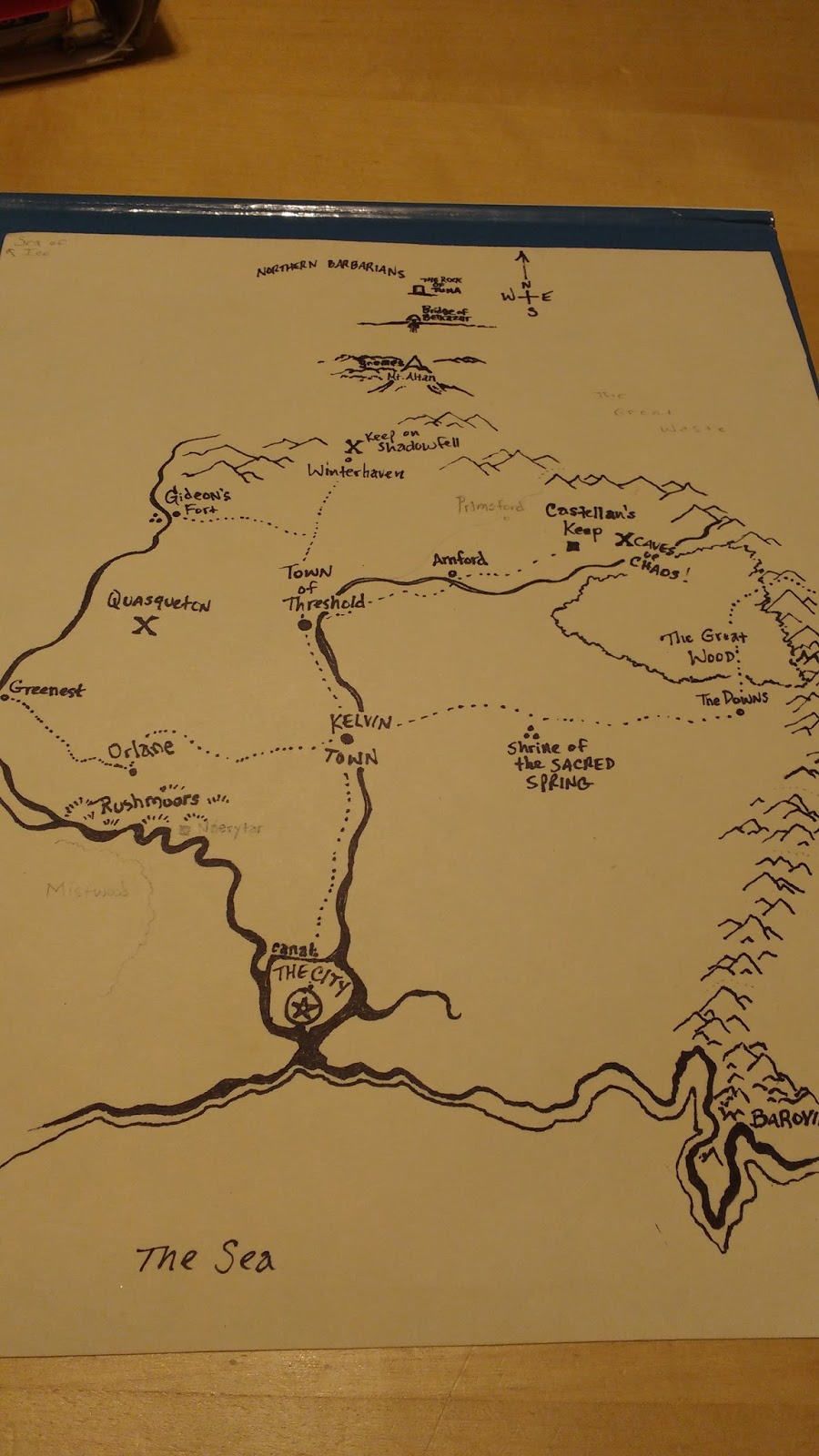 Working our way toward the borders of The Realm, the Downs found its place.  Clearly the Druids lived deep in forests beyond ... else why should it take a quest to locate them in The Forest Oracle (N2)?  And even farther to the east travelers can sometimes pass out of the Fields Men Know and into Olvenhome (where Rahasia may be found).

From there Winterhaven and the Keep on the Shadowfell (H1) naturally had to be placed at the northern edge of civilized lands while Gideon's Fort (renamed from Guido's Fort in Horror on the Hill) became a frontier trading post.  About this time Mary the Halfling took ship over the southern horizon toward the Isle of Dread (X1) incorporating an adventure run by my oldest into our campaign world.

Orlane (Against the Cult of the Reptile God), Greenest (Hoard of the Dragon Queen), and the Rock of Tuma (Journey to the Rock and The Lost City) represented the next batch of adventurers.

Following The Curse of Xanathon, which placed the neighboring kingdom of Rhoona on the southeastern edge of our map (cut off in this pic), my oldest is now running Master of the Desert Nomads for us, necessitating the addition of Pramsford (replacing Pramayana) while The Great Waste became a cold steppe, nicely fitting into the same desert space required in Journey to the Rock.

Oh, you'll also spot the small Barony of Barovia along the storm-wracked southeastern coast, not far from the borders of Rhoona.

There is a theme to our geography: a small Realm of Men, ringed with castles and border forts, holding back the savage wilds.  In time this may allow characters the opportunity to take charge of these fortresses.

The main idea was to keep adventure locations densely packed and intimate so as to create relationships through synergy -- of course the evil clerics in The Caves of Chaos are followers of Orcus ... part of the same cult who trouble Winterhaven!  Likewise the orcs from the Caves of Chaos are related to the Bloody Hand tribe who lurk in The Great Wood and hinder the party's journey to find the ArchDruid.

Wherever possible, locations, villains, friendly NPCs, and factions are reused and this seems to add depth and connection for my players.
Posted by Jarrett Perdue at Monday, February 01, 2016