For this year's two-week summer enrichment games camp I turned once again to RISK as a reliable, clear, and rapid paced "tent pole" game around which to build our tournament.

Rather than the traditional board, I used a board that I painted with a custom map to match my Olde School Wizardry RPG campaign world.  Major events and upsets during the tournament could then be used to shape events in my bi-monthly table top role-playing campaign. 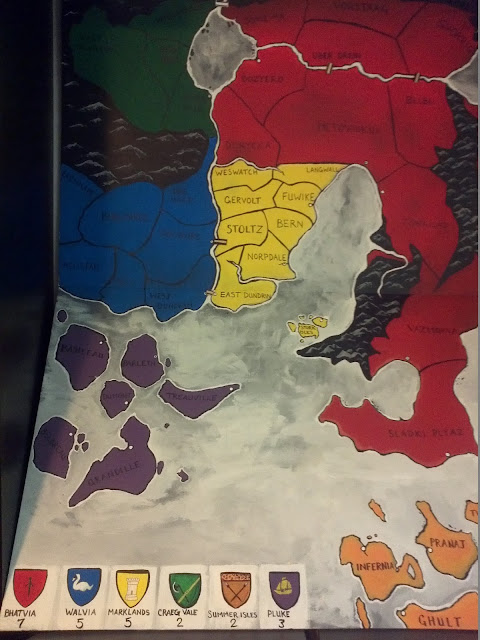 I made some rules modifications to this old classic to make it serve our purposes.

The ports result in a much more interconnected map.

Compare North America's 3 points of entry in classic RISK game, or Australia's much-remarked single point of entry via Siam with the 17 possible places that Walvia (blue) can be assailed from.

This encourages a defensive game and with the addition of stronger defense via the walled cities it means that attacks have to be very large and very deliberate to have hopes of breaking through fortified lines.  The result gives things more if a WWI flavor than a Napoleonic one, and it shifts the recipe for success away from mere dice rolling and to the unrestricted social game.

Players schemed, made deals, and broke bargains in a way that was completely unrestricted by the rules, and it was fun to watch as the action spilled over outside of class time as alliances of convenience were forged in the lunchroom.

I don't know if I'll use the same board for next year's summer games camp or hatch something new, but I'll definitely maintain the practice of having a "main event" game that lends context and continuity to the tournament.
Posted by Jarrett Perdue at Saturday, August 01, 2015