Why RPGs Work So Well for Students

Recently, gearing up for the coming school year, I read Michael Reichert and Richard Hawley's Reaching Boys Teaching Boys: Strategies That Work -- and Why (Jossey-Bass 2010).


For teachers: "YOUR TASK: to narrate clearly and objectively an instructional activity that is especially, perhaps unusually effective in heightening boys' learning."

For students: "In the box below, tell us a story of a class experience that stands out as being especially memorable for you."

What they found will come as no surprise to any life-long gamer:

"In no other area of this study was there a stronger concordance between boys and teachers than in their agreement about the power of games to bring new energy and interest to the classroom."
(Reichert and Hawley 58)

And for gamers who, like me, have been bitten by the role-playing bug, this next quote will certainly ring true: 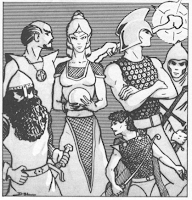 "Many teachers found that requiring boys to take a role -- whether an impersonation or as part of a purely physical process -- was transitive to a deeper, surer understanding of the material under study.  In many cases too, the requirement to perform before others contributed to the student's sense of responsibility for the ultimate mastery of an assigned task." (Reichert and Hawley 85)

If you place a student in the role of a wizard who must solve a two-step equation to unlock the sealed door before the ghouls can eat the explorers then he is far more likely to learn and retain the mathematical concepts.

"Teachers in boys' schools are quick to assert that boys together are quick and often eager to suspend belief and imaginatively assume roles ... The boys in this study strongly affirmed the pleasure -- and the resulting learning -- of being asked to get out of their familiar skin." (Reichert and Hawley 101)

Students adopting other roles intuitively and with ease.  My experience introducing a few hundred kids to tabletop role-playing has certainly affirmed this.  I never recall having to explain what was meant by "playing a character" ... suggesting that all of the "What is Role-playing?" introductions written in the vast majority of published rules amount to wasted ink.  Kids already know, and they like it.

"Across disciplines, teachers noted the energizing effects of setting boys to tasks for which successful resolution was perhaps possible but by no means certain--or easy." (Reichert and Hawley 111)

In other words, the possibility of dismal failure is part of what makes an activity engaging.  If the characters will automatically move through three, pre-planned encounters followed by a carefully balanced boss-fight, though it is a trope common to console gaming, that's actually less energizing to many young people then the possibility of getting squashed by a trap two rooms into the dungeon. 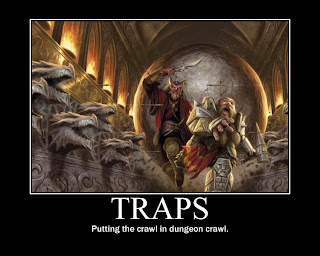 MMORPGs tap into this very nicely -- follow the quest if you want, but you never know when "KilB1zz666" is going to come dashing in and shoot your character in the head / knock down your building project for no particular reason.  In that format the other players take the role occupied by wandering monsters in D&D.

"Perhaps unsurprisingly, teachers in all disciplines noted--and to an extent were willing to indulge--their boys' fascination with (sometimes literally) volatile material ... [this] suggests the transivity of providing students with a safe brush with danger." (Reichert and Hawley 172)

So games, in particular role-playing games, have a direct line to student engagement, interest, and learning.

This shifts the question to:

"How can I effectively incorporate RPGs and role-playing elements into regular instruction to enhance student learning?"
Posted by Jarrett Perdue at Sunday, August 16, 2015