NPC interaction is a cornerstone of Olde School Wizardry, my home brew RPG -- much more so than combat, exploration, or crawling through subterranean vaults.

In fact, after about six and a half years of play we've built up a stable of nearly 200 non-player characters.  There are dastardly spies, incompetent wizards, scheming artificers, and stalwart clansmen ... a masked vampire, mercenaries, and vindictive professors.


However, managing all of these personas consistently (and distinctively) requires some effort!

One thing I do to keep it all straight (and just as importantly to help my players keep all these characters sorted out) is to create a simple 3x5, index card for each. 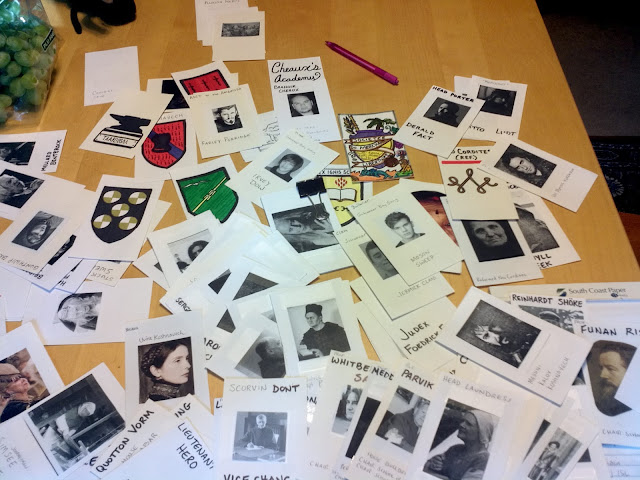 Photo and name go on the front for my players -- a clothespin or clip help these stand up for a table display -- while notes on accent, goals, alignment, and any stats I've generated go on the back for my reference.

Have you ever managed a large stable of recurring NPCs?
What tricks did you use to keep all the details sorted out?
Posted by Jarrett Perdue at Thursday, July 30, 2015