The dungeon maps that my eldest drew in games camp last week are sitting in my game room right now.  They are on big chart paper, about a yard long each and they have a cool, herky-jerky, frenetic quality to them.  Scaled for the chessmen that she used for miniatures (knights = fighters, bishops = MUs, etc.), they are delightfully unselfconscious in the style of kid-DMs everywhere. 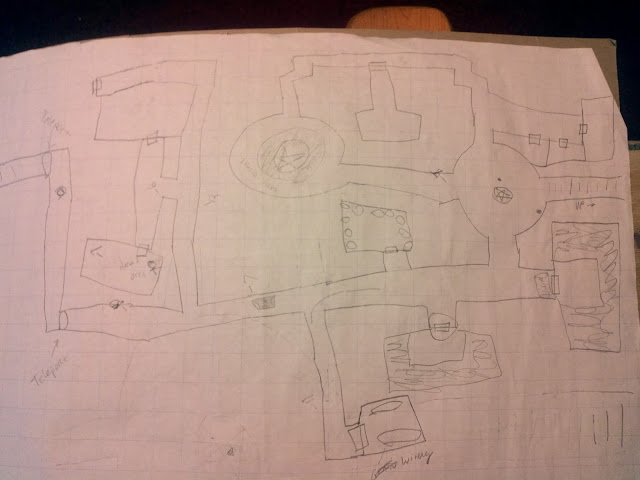 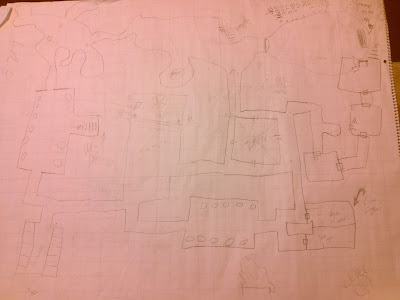 Still, they pose a problem:

What do we DO with them now?

They are artifacts, but the story has moved on.

I cannot offer her advice, because it's not a problem I've ever really solved for myself.

I still have some hand drawn encounter maps from my early 1990s AD&D campaign.  I think they show BLAM, Arnold, Namor, Jessie and the rest of the gang squaring off against Ogremoch or some other critter in the megadungeon that grew below The Lost Caverns of Tsojcanth.


Scrawled dutifully on graph paper, they are really just a collection of hastily-noted circles and lines with notes on declining hit point totals marching along beside and the occasional spiky-edged blast marking the detonation of yet another fireball.


Digging back deeper still I may even have some maps from the late 80s ... and certainly character sheets going back to the days when all I had were my brother's Moldvay Basic box, the AD&D Monster Manual, and a single, small, lumpy, brown d20 which we passed back and forth ... come to think of it ... that d20 looks more than a bit like Ogremoch.

Many players have had their parents answer the question for them ... it's a wonder that there is even room in our landfills for all the collections of vintage D&D books, GI Joe comics (issue #2!), and similar treasures that have been cleared away while Bilbo was off on his adventure (to this day I'm grateful that my parents never did this to me).

Still ... what to DO with this old stuff -- the relics of games gone by ... stories that even my players probably don't recall.  I guess they are kind of like an old photo album (remember those?).  You just drag it out every once and a while, look at, and tuck it away again.