The Saturday prior, after my oldest finished karate practice, Dad & Daughters rolled up to 2nd and Charles in Woodbridge for this year's free RPG day.  I thought it was going to be a jumbo used book store (which in my experience usually smell a bit like cat pee) but I was pleasantly surprised -- a former Borders (I think), this place had clearly been converted into a nerd haven of the first order.

A suit of imperial stormtrooper armor greeted us at the door and the rest was just a blur of used books, old comics, music, guitars, memorabilia, trading cards ... etc, etc.

The staff was super-friendly and, oddly, seemed to have all the usual suite of social skills that most adults do -- Not at all the "Robot's Dungeon" experience I had anticipated. 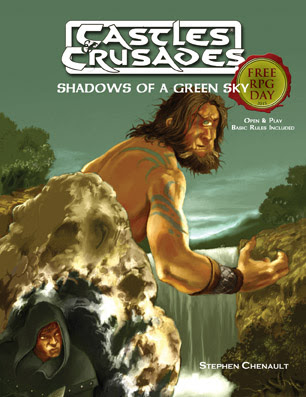 Anyway, we made the run of the table, each girl grabbing a couple items.  I snagged a Castles & Crusades module among other things.

So, once we had loaded up on the freebies, my goal was to browse a bit and get back out of the dung... er ... store without making any reckless purchases.

But that's when we were invited to try the FATE role-playing system.  After a quick sidebar we decided that we could stick around for a quick one-shot and learned this rollicking, light system that reminds me a bit of the old White Wolf stuff mixed with S. John Ross's laudable Risus "The Anything RPG".

Anyway, before long Blueberry the halfling forester, an absent-minded wizard, and a talking, Casanova ferret joined in the quest to thump some goblins and rescue the baron's son.

FATE had some charming and fun little features like player-driven initiative (after his or her turn, each player would decide who should have their turn next) and a nice mechanic for aiding other character's actions.

So it made for a great dad-and-daughters outing and got the kids revved up to roleplay at the dining room table for many days to come.