What could possibly make for a better eleventh birthday?

This year, rather than our traditional blow-out, heavily-themed birthday party, my daughter decided that she wanted to have some friends over to play D&D and have a sleep over.  My job was to decorate the cake and serve as DM ... the primary source of entertainment.

Two of the players were novices and one had never even seen a twenty-sided die before, so I really want to pull out all the stops and make this game / birthday party super-memorable.  Here are some of the ways I stepped up my game: 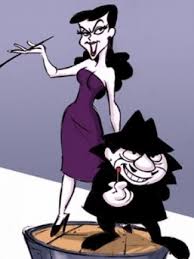 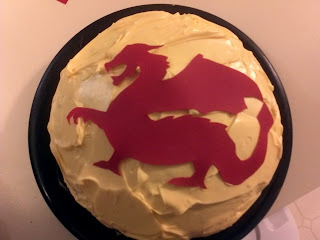 "I noticed The Chained Coffin, Against the Cult of the Reptile God, and Night Below ... are one of those going to be the adventure we play?" 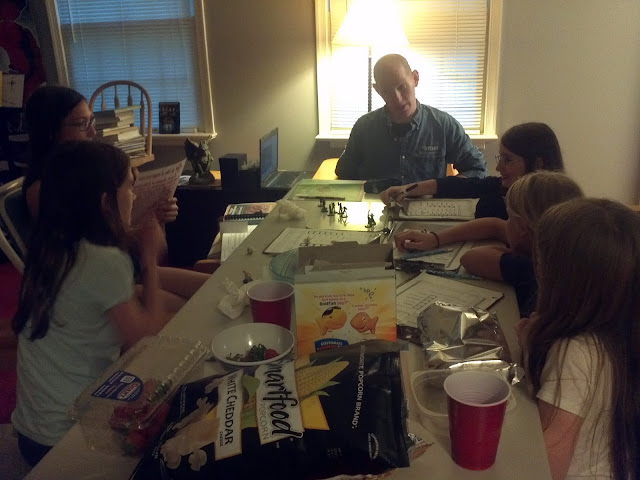 I realized that I had only about five hours in which to make the whole game work, so I went with a much more heavy-handed approach than I am accustomed to.  Transitions between encounters were quick and I didn't have my players do any mapping (instead a clue led to a cache of old papers that included a partial map of Castle Ravenloft).

Rather than a wide open sandbox, the clues (mostly delivered by the fortune teller) were pretty direct ... I was proud when one of the girls figured out that "a place of supplication and ruin" meant that the Holy Symbol of Ravenkind was probably either in the village church or a chapel in Castle Ravenloft before even knowing if the castle had a chapel or not.

Likewise, the gang worked out that "prince of light" meant that they should look for a magical scabbard in the hypothetical tomb of Strahd's hypothetical brother (again, correct deductions).

Though we had one character who was level four ... most of the characters were only second level (and one only first!), so knew I'd have to scale the challenges somewhat while maintaining the correct level of challenge and sheer, delighted, terror.

Still, they tangled with some buffed zombies (and set them on fire) and ran afoul of no less than nine grave wights!

Essentially the game was a timed scavenger hunt in which the characters dashed around collecting whatever resources they could find before night set in and the vampire came for the showdown.

Having recovered the Holy Symbol and magical scabbard (which empowered the birthday girl's trusty magic sword with some anti-undead butt-kickery), the girls showed some serious prudence by withdrawing from the castle and holing up in the village church by nightfall, even though it meant passing up on the chance to hunt for some other goodies.

The bad guys turned up on cue and en masse, but twin sunlight blasts from holy symbol and sword, along with a volley of elven arrows, decimated the rank and file undead and left Count Strahd damaged.  Rather than risk his immortal life, after a vow of revenge, he turned into a bat and made a hasty retreat back to the haunted castle, leaving the girls victorious and with enough time to play a bit of capture the flag out in the yard!
Posted by Jarrett Perdue at Saturday, June 20, 2015