Farewell to Phandalin: Part I

Tuesday I ran our 30th and final session of our 5th edition Lost Mines of Phandelver Campaign. 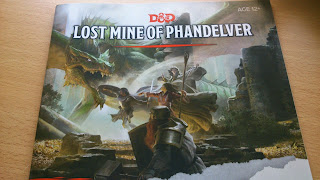 Back in September I didn't imagine that this adventure's one village location and four modest, linked dungeons (most just eight or nine rooms) would last us for over forty hours of play ... and we never even started the second half of the adventure!

Following the Siege at the Cragmaw Hideout, in which the four surviving adventurers (a wizard, an elf, a wolf, and a talking stick) were driven out of their new digs and were pursued by goblins back to Phandalin, we arranged a final showdown: a two-part, three hour extravaganza. 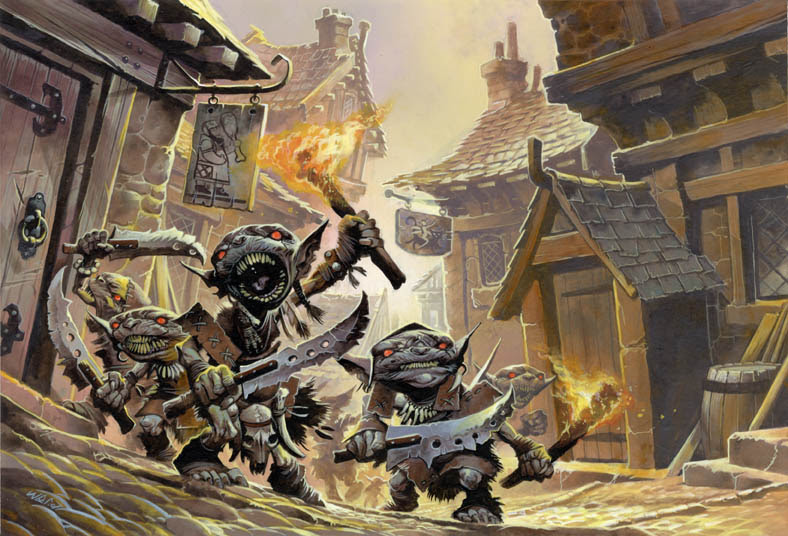 As a storm gathered on the western horizon, rushing the afternoon into a premature twilight, the goblins flooded across the boundaries of the rustic hamlet of Phandalin.  Though they had a bargain with Glasstaff, the leader of the Redbrand brigand gang, too many of their folk had fallen recently under the swords of mysterious human mercenaries (our players) to be mere coincidence.  The goblins decided that they had been set up and they were ready to take revenge!

While most of the adventurers either cowered or looted food, the goblins set the Barthen's Provisions alight and squared off with the Redbrands in what became a swirling series of skirmishes through the streets of the village.

As losses began to mount on both sides, the wily elven rogue gave in to his hunger and frustration and, after a bit of looting, was cut down in the taproom of the Stonehill Inn by a brigand.


Then, just as Lol the wizard sought a refuge from the fighting in the Miner's Exchange, the dragon plunged down upon Phandalin, crushing the building beneath its bulk and throwing up vast clouds of dust with its wings.

Having had its lair in the ruins of Thundertree disturbed twice by the adventurers, the dragon had trailed them back to Phandalin -- in fact it was even noticed three sessions earlier as a winged shape circling high above.

With the sudden descent of the dragon, the Cragmaw goblins and Redbrands called an abrupt truce and agreed to join forces against the formidable creature.

We divided up the forces this way:

I offered control of the dragon to the former player of the sneaky elf, but he declined so I took charge of it.  With 136 hit points, an Armor Class of 18, and a 12D6 breath weapon attack (that's 12-72 points of damage y'all) I wondered if the dragon would go through the forces arrayed against it (all but two of whom had 16 hit points or less) like a scythe through wheat.

As it happened, however, the goblin archers quickly demonstrated what so many other Lost Mines of Phandelver players have learned: a squad of goblin sharpshooters can be devastating!

Backed by longbow armed hobgoblins, the greenskins dealt the dragon over 30 hit points of damage in the first round alone!

While Lol, Glasstaff, gangsters, and wolf maneuvered, the dragon took to the air and delivered a blast of its toxic gas breath weapon, wiping out half of the Cragmaw raiders and Redbrands in a single blow!

Lesson Learned: bunching up when facing a dragon is a BAD idea.

On round two Glasstaff ripped into the dragon with a second volley of Magic Missiles and, as goblins rained more arrows, the dragon dove at him.  With Glasstaff's AC fortified with Mage Armor and his protective staff, the dragon only managed to inflict about 10 points of damage on the wily wizard.

By round three Lol came out of hiding to hit the dragon with a Flaming Sphere, always careful to keep his distance and attack from behind.

At about this point the owlbear finally got into the action.  Each turn I required the owlbear's player to roll a D20 on his own little custom chart: 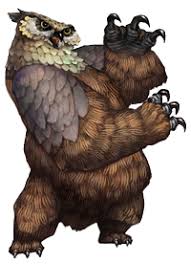 The beast had stalled out the first couple of rounds, but now it rushed toward the dragon from behind with a howl (repeated often by the player).


As the Staffling, now carried by the Cragmaw warchief, spat thorns and the surviving goblins and brigands maneuvered, a brave Redbrand appeared at the end of an alley and, shouting insults and waving frantically, drew the dragon's attention away from Glasstaff (who it had pinned) before the monster could crush the life out of the recumbent wizard (the player rolled a 19 on her Charisma check).

Soon, with the storm finally breaking over the town, gangsters and goblins of various sizes converged on the alley, chopping, hacking, and loosing arrows against the dragon's nearly-impenetrable hide.  Even the wolf plucked up enough courage to dash in and snap at the huge reptile's foreleg.

A great improvement in recent editions of D&D is the variable "recharge" time on dragon breath attacks.  In the olden days, dragons were limited to three breath attacks per day, which seemed a bit lame for a legendary creature, but which was a necessary limitation to make dragon encounters interesting -- doubly so since, unlike virtually every other creature in the entire game, dragon breath inflicted a fixed amount of damage equal to the critter's current hit points.  This rule was probably deemed necessary to nerf dragons somewhat.  Otherwise a mature red dragon would simply inflict 66 points on everything in range every round ... both boring and deadly.  A final way in which this original system was just awful lay in that it broke a cardinal rule for maintaining excitement and suspense: Never, NEVER tell the players how many hit points the monster has left.

Instead, the new mechanic for dragon breath has the critter roll each round after its initial burst to see if its fumes, fire, frost, etc have regenerated enough to use again.  Add variable damage instead of a fixed number and BOOM!  A highly suspenseful "will he or won't he?" situation arises that keeps everyone at the table (DM included) on his or her toes and holding their breath (heh) with every roll. 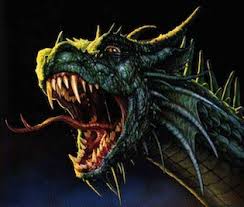 Well, as you can guess, lured into an alley with a mad owlbear tearing at its tail and a mob of enemies before it, BINGO!


With a mighty roar the injured beast kicked skyward and blasted the alley for another 12D6 damage.

Remember that lesson from before?

Yeah, bunching up is STILL a bad idea.

Now, with rain pattering down, only a handful of defenders were still alive:  Lol, Glasstaff, two brigands and the owlbear (who had nearly succumbed) remained nearby, while across town the warchief, Staffling, Ted and four Cragmaw raiders remained on their feet.

The dragon was enraged, but badly injured.  Could it stay aloft, flapping above arrow range until its deadly breath weapon recharged again?