Are miniatures a crutch that impedes the growth of a vivid imagination, or a tool that helps kids (who are used to their entertainment and games having potent, interactive visual components) access an otherwise esoteric medium?

When I started role-playing in 1981 we didn't use miniatures, but this illustration from the Tom Moldvay Basic D&D boxed set always itched at the edge of my brain: 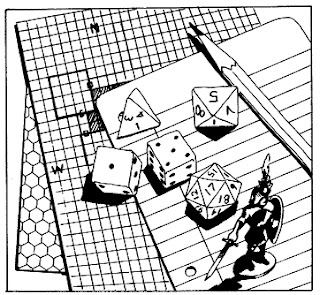 Nothing in the picture, and little in the text, really suggested what one was supposed to do with the miniatures ... but they were clearly part of the cool, exotic paraphernalia that marked D&D as fundamentally different from any other leisure activity that we'd ever encountered.

By 1984 I had started GMing games for the kids in the nearby subdivision ... something that I'd continue for about the next decade ... and along with more books and rules (starting with Monster Manual of course) I began acquiring a few lead miniatures from Heritage's Dungeon Dwellers line.

Honestly, some of those old sculpts were laughable by modern standards -- you couldn't always tell what any given model was ... my paint job did nothing to enhance this ... and being made of soft lead, sometimes simply falling over on the table was enough to break bits off.  Even then, I didn't actually use the miniatures while role-playing.  Instead they remained display pieces.  We tracked marching order and sketched out tactical combat maps (when that was even necessary) the same way we always had ... on notebook or graph paper.

Miniatures looked massively cool, especially in my mind-blowing first issues of Dragon Magazine, the main obstacles to their actual utility at the table were twofold:

2. "You are attacked by big, orange, hairy goblins," ... "Those are just bugbears." ... "Okay, you are attacked by a bunch of bugbears.  It looks like, maybe twenty or so, and they have crossbows.  Roll for initiative."
Where, on lawnmower money, was a guy supposed to get 20 bugbear models (let alone with crossbows)?  What about the 30 gnolls for the next encounter?  On the other hand, if the miniatures were intended to merely serve as examples of the creatures encountered, well David Trampier's illustrations could communicate the threat much better than my inch-tall paint-coated blob.
When playing D&D with my own kids, however, miniatures (and dungeon tiles) have always helped them and their friends (mostly in the single-digit age bracket) pay attention to the game.

As I ponder returning to my Bawal Bayan campaign this summer, I've decided to try and use miniatures to represent player characters with the goal of letting each student take their mini home at the end of class (along with a d20 and a copy of the Dagger for Kids rules).  The goal won't be play utility as much as a token reminder of the game ... and perhaps an invitation to pick the hobby back up someday.

Even if I went for the new, cheaper generation of polymer minis (see Bones by Reaper Miniatures), I'd easily exceed my class budget trying to buy enough for the kids to walk away with some kewlness.  Instead, I'm going to try and go cheap with these:

Thirty-six plastic knights, sculpted in reasonable detail, for about seven bucks!  You can find them here if you want to build an army on the cheap.  I'm going to try my hand at painting these and will post the results.