"An ape tore my arm off and then another one killed me."

"In Dagger.  It's this game we're playing in Core class.  It's really cool.  You're like looking for treasure and fighting monsters ..."

Those were the first words I heard drifting down the hall this morning as roughly 300 eighth graders shuffled in from the bus ramp.  I heard students talking about Dagger for Kids (their very first tabletop role-playing game) two other times before the instructional day started, recounting a narrow escape or a grisly death.  Several times during the day I also noticed students lingering near the set of shelves behind my desk.  After a while I realized that they were studying the tactical maps that we generate during each session of play -- I hang these up on a bit of spare wall -- making comments on the monsters or retracing the progress of a group of explorers. 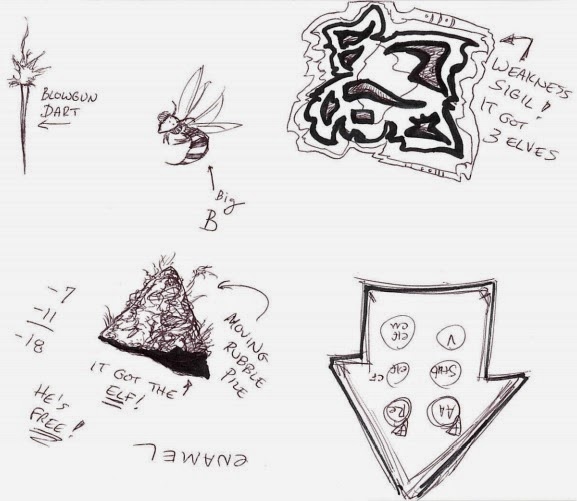 After placing the other 22 students into groups, getting leaders briefed, and handing materials out, my six surviving explorers were ready and eager to see what treasure and danger Bawal Bayan held in store today.

Last time Stubs the Elf and a lady knight were slain by apes just beyond The Serpent Gate in the courtyard of The Palace.  The two dwarves, Gilmie and Victoria, whose players had been absent last class due to a last-moment shift in the standardized testing schedule, rejoined the three surviving elves and Sir Reseon.  We explained their abrupt reappearance with a narrative segue: 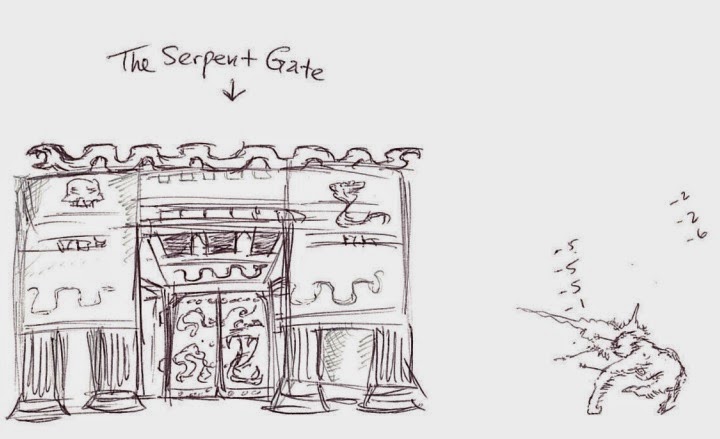 "Having traveled back up The Black Canyon to gather supplies, you two headed for The Stockade only to find a line of giant ants blocking your path.  Rather than just wait around in the jungle and risk being ambushed, you backtracked, crossed The Wall, and followed the your companions' recent trail to The Crevasse and the rope bridge.  You didn't feel good about trying to cross in your heavy armor until the ruins south of The Plaza of the Sun began to boil with creeping ... what did you decide to call them? ..."

"Right.  Maybe twenty of those.  As you quickly crossed the rope bridge, you heard a gong ring from beyond The Serpent Gate and heard the sounds of battle.  In the end, you were forced to cut the rope bridge to keep the creatures from swarming across after you.  From there you ran for The Palace."

"Don't take the stairs!  They're trapped."

"No, they didn't know about the trap, but you guys already set off the magic spell so it was clear for them to climb up.  So you rejoined Sir Reseon, Buddy, Viking ... "

"Um, okay.  'Saint Viking' and the other elf just outside The Palace."

With that established, and a pair of golden collars looted from the bodies of the carnivorous apes, the six explorers decided to avoid the main entrance of the great structure and follow the sounds of splashing water around the north side of The Palace.  They picked their way warily through a garden and past some statuary until a lucky spot check allowed an elf to pick out the form of a "gremlin" (tasloi) hiding among the taller grasses.  They were a little surprised to see that the creature was wearing a "funny hat" (a fez).

"Oh, remember how with those other things it kept leading to like, bigger and bigger ones and then there was like, 'The Big One'?  I bet it's like that."

"I think he's a servant in The Palace.  He brings them food and stuff."

After some discussion, the explorers surprised me by deciding to withdraw, reform their marching order with their stealthier elves at the front, and creep back to watch the tasloi to see what it would do and where it would go.

Their planning was quickly rewarded when the creature hopped out of the grass and trotted off to a side entrance of The Palace, jabbering all the while.  They followed, pausing only to peer through a tall bamboo fence at a black leopard resting in the shade of a distant tree.  The tasloi butler headed for a garrison chamber and the group was able to catch a group of the bat-men by surprise and slay them without any losses.  Wisely deploying two elves to the rear, the party avoided being surprised themselves by another half-dozen guards who soon came to investigate, and they soon bested these as well.

Just about the time they were beginning to grow a bit cocky, a magic missile streaked down the hall and blasted Buddy the Elf!  The master of The Palace and ruler of the tasloi tribe, a rogue wizard, appeared at the far doorway, flanked by a pair of leopards. 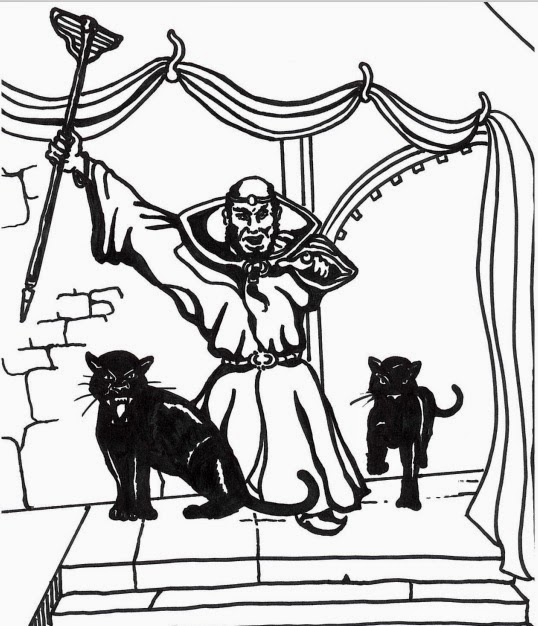 Meanwhile, Buddy wailed and thrashed as he burned to no avail, only one other elf had a spell remaining with which he might heal his comrade and he remained emphatic that he was saving it for himself!

"Can I at least pick up his experience points?"

Sir Reseon sprang down the hallway and was met by the hissing leopards.  Arrows were loosed at the wizard but, while one found its mark, several more were mysteriously deflected.  The knight turned one spell aside with his shield, but an intervening web spell ended any hope of easily reaching the wizard as he withdrew to heal himself.  The leopards were defeated, but not before Sir Reseon was badly clawed.

"I think we should run."

"No, we should go around and check that gate.  Maybe we can sneak around and get him."

"I think we should go back to The Stockade."

"We should have shot that leopard when we saw it through the gate."

"Remember that whistle we heard?  He was calling them."

"Yeah, look.  Here's the way to the door.  See?  He trapped himself with his web spell."

After a bit more discussion they decided to risk splitting the party, sending a dwarf and Saint Viking (the mostly curiously named elf ever) to burn the web and try to flush the wizard out, while the other three waited in ambush around a corner of the garden.  When an elf risked a look around the corner he was targeted with a lightning bolt!  A failed save meant that he was flash-fried on the spot!

"But wait, he's already cast five spells.  How many more could he have?"

After consulting their copies of Dagger for Kids (only 8 pages including the Open Game License!), the students decided to press what they hoped was their advantage.  By then the web spell had been burned and hacked aside.  Saint Viking made a desperate charge to try and catch the wizard off guard, but failed spectacularly and ended up in a heap at the feet of the wizard's four tasloi bodyguards.

" 'You two, kill the fool.  You two, come with me,' the wizard snarls at his henchmen before turning with a heavy sack at his shoulder and slipping behind a lattice that leans against the wall surrounding the courtyard."

Victoria gathered Gil the Dwarf and Sir Reseon for a charge, but as they rounded the corner they saw a tasloi deliver a cruel, final stroke, impaling Saint Viking!  The last of the elves had fallen!  In a rage (or perhaps just a streak of good luck) Victoria hacked down both guards and led the dash to what was obviously a secret door leading out of The Palace.  The explorers were determined to avenge their comrades ... or at least take a crack at getting at whatever was in that sack the wizard was carrying!
As the class period ended, Sir Reseon fell to the guards and lucky Gilmie's good fortune finally ran out with the stroke of a spell and a missed saving throw.  He perished after a record nine sessions of play!  Remembering that the bridge had been cut behind her, Victoria, now the sole survivor, decided to gamble everything and chase the fleeing wizard into the ruins of near The Canal, bent on exacting revenge!
Posted by Jarrett Perdue at Thursday, June 05, 2014