And then they got evil.


Our 28th session of Dwimmermount began with the gang finishing up character generation to reconstitute the much-diminished ranks of "The Damaged Souls."


Vale the Conjurer, nearing 4th level, brought the following recruits into the fold:

This new composition gave the group a decidedly Neutral Evil flavor (especially without Hurtis or Ivor to balance things out a bit). 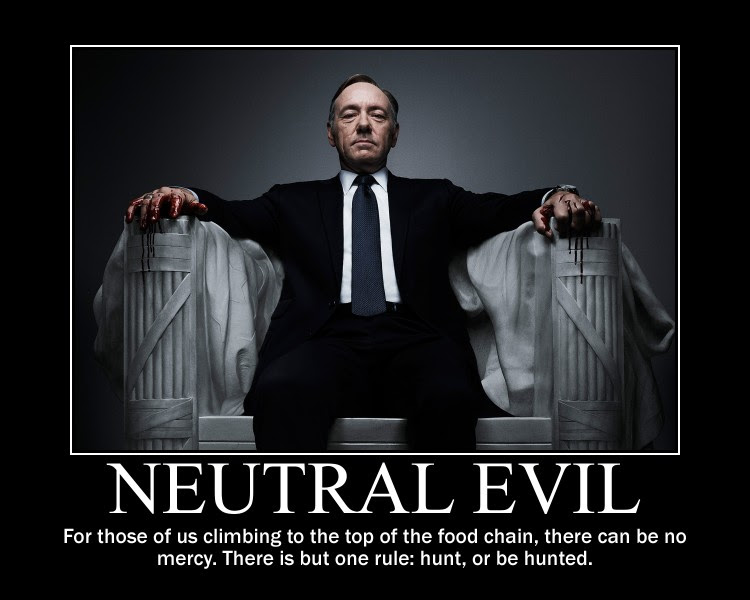 Sergei (F3) remained in Muntburg to recover from his latest harrowing, near-fatal delve and to bury his fallen comrades.
The crew did a little shopping, managing to forget to purchase extra torches but remembering the iron spikes, before ascending the Dwimmermount.
Vale took the lead and, after a bit of debate, decided that the group should move through the picked-over first dungeon level and descend to the western side of level two to do a bit of exploring.
En route, however, they heard voices and saw light coming from the direction of the great vertical shaft on level one that plunges deep into the mountain.

Investigating cautiously, the group came upon The Seekers, a higher level adventuring party who have helped them out a time or two in the past.  With the loss of Yang (a Seekers henchman who agreed to travel with Vale's group until he was captured by goblins), things had cooled a bit between the two groups, but they were still on civil terms and sometimes met at The Green Dragon to swap stories. 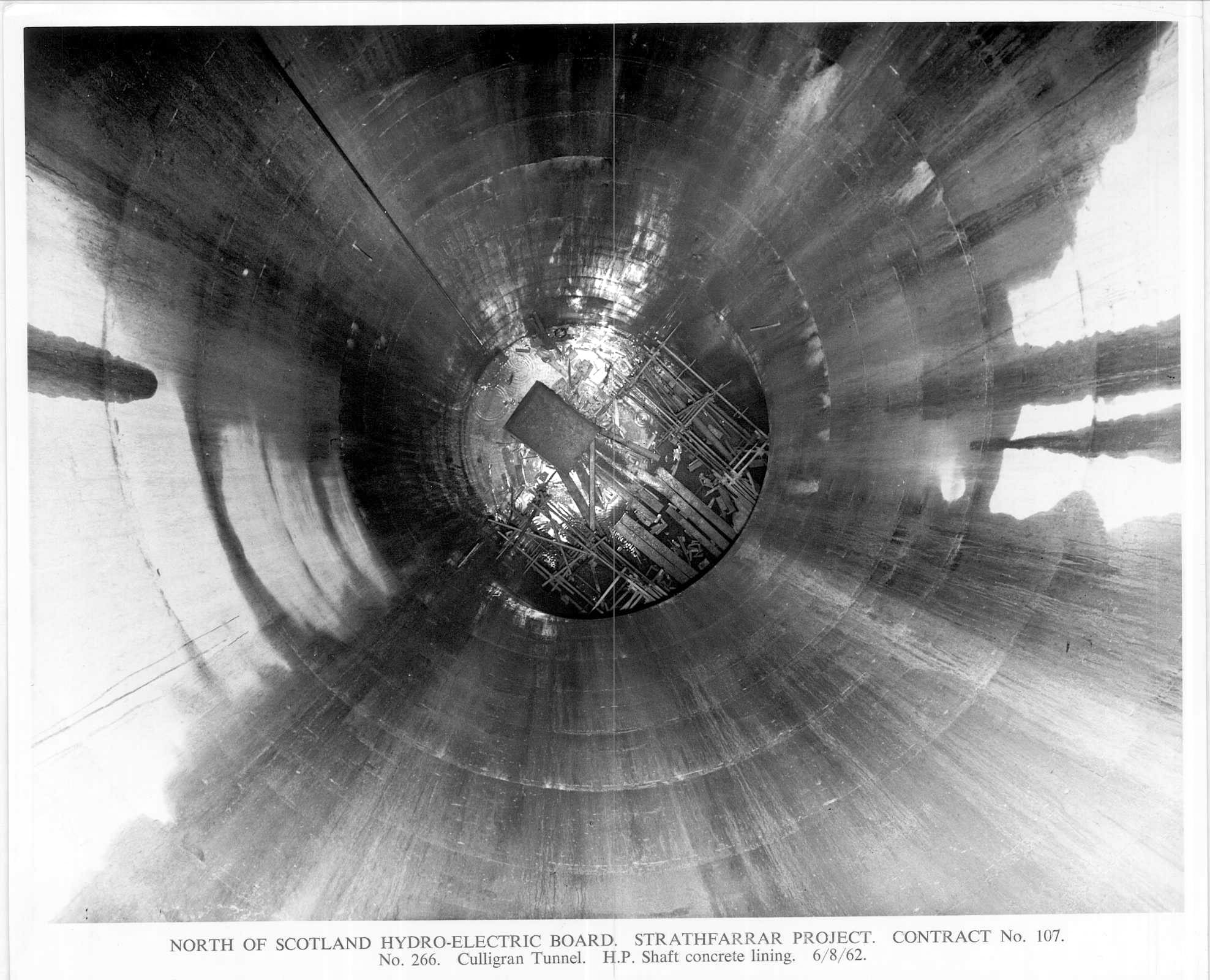 The Seekers were busy descending The Great Shaft.  As scout "Jeffroy" watched the rear and operated a carefully braced windlass, Ogal, the group's dwimmerling (dwarf) warrior guarded a lower hall at the bottom of the ropes.  Ysabellon, an aged but spry cleric and the group's leader was being lowered via a sling along with the party's magic-user.

It was at this point that Vale once again heard the thin, whispering voice in her mind that had first motivated her to explore Dwimmermount months earlier:

"I will teach you ... again."
Vale approached the wary rear guard and began chatting with her characteristic silver tongue.

"Look, I know that things have been a little tense because of the whole Yang thing, but these big mutant goblin guys took him prisoner down on level two.  We've got this ... they've still got the rest."
At this point Vale tossed Jeffroy Yang's severed ear and, while he gaped at it, followed with a burst of Magic Missiles to his chest!
Ander was quick to follow with a shot from his bow and Jeffroy only escaped by quaffing a potion, shouting a warning, and leaping into the yawning pit.

While Nyxia and Jack cut through the rope supporting Ysabellon and Marguerin the magic-user ("I remember that ap"), Ander looked over the edge.  Below he spied Jeffroy clinging to the slick walls of the shaft like a fly (thanks to his magic potion), Marguerin casting Levitate upon herself in the nick of time, and a fighter dragging the injured (but not dead) Ysabellon clear of the bottom of the shaft ... however, before he could pick any of them off with his bow, an answering volley of Magic Missiles from below took Ander out of the action.


Vale's group fell back, fearing more spell fire from the more accomplished explorers, with Nyxia dragging Ander behind her.

Just then Jack cried a warning and ducked behind the unarmored characters as a swarm of six-foot-long, many-legged arthropods came scuttling from some other part of the first dungeon level.

"You're a coward -- you aren't doing anything!"

"That's not true!  I switched from my war hammer to my spear and shield."

"...and the didn't DO anything!"
Surprisingly, however, all but one of the carapace-clad horrors didn't attack, but swarmed down the shaft.  The final creature came to a stop before Vale and began swaying.  Staring into its many-faceted eyes, she tried to communicate with it while Nyxia's Detect Magic confirmed that it was under the influence of some spell, but these attempts came to naught and it stung Vale on the back of her hand before scuttling off after its brethren.

"Back away!" came the angry reply from below.

The group bolted from the dungeon and made a double-time march back to Muntburg.

Realizing that The Seekers couldn't be too far behind them, they put most of their remaining coin toward the purchase of a donkey, strapped Ander on it, and left town in a hurry, bound for the city of Adamas. 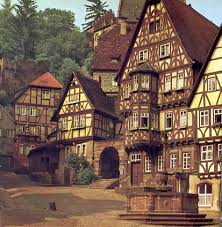 We ended the session with the group pawning their last piece of jewelry to Gaztea the fence  on the edge of the Great Market of Adamas and taking a room at The Gilded Coach.
---------------------------------------------
Well, for a botched hit on a higher level party, things could have gone FAR worse for The Damaged Souls, however, they are now afraid to show their faces in Muntburg again.  Is the opportunity to explore (and loot) Dwimmermount now lost to the party?

"Guys, we need to find ourselves another dungeon."

I'm honestly not sure where they will decide to go from here.  They have a map to some old Eld fastness (called "Stonehell" by the dwimmerling slaves who once labored there), but with their cash all but exhausted and only three sessions of club remaining this year, I don't think I can predict the group's next move.

Will they risk a return to the mountain, avoiding Muntburg or adopting disguises, try to join the criminal underworld in Adamas, set off in a cross-country ramble, or something completely different?

I'd like to bring the campaign to a satisfactory close of course, but by letting the dice land where they may and prioritizing player agency over any sort of plot line, there are certainly no guarantees!
Posted by Jarrett Perdue at Wednesday, May 25, 2016