We opened what would turn out to be a landmark session with Vale the magic-user far from the rest of the explorers and surrounded by a squad of the thick-limbed, ruddy-skinned dwimmer-goblins.


The spells she had woven to maintain the ruse that she was one of them were quickly fading and already the goblins were becoming suspicious, but at just that moment the  floors and walls of the entire dungeon level began to vibrate!  As unseen pipes and conduits creaked, knocked, and groaned and distant lights flickered or flared and died in showers of sparks, Thaddeus V and the other recently awaken goblin clone soldiers hastened back to the command post of Rurik, their centurion.  Vale spared not a moment, but dashed off into the darkened halls.


[All this clamor was of course the result of Sergei's fiddling around in the room of lenses and levers down on level three, accidentally powering up various portions of the dungeon.]


At this point, since Y'draneal, the party's mapper, was down on level three, I cleared the table of all maps, insisting that Vale's player navigate her way out of the dungeon by memory alone!  Fortunately, Vale was up to the task and moved unerringly toward the stairs.


Never one to make things too easy, I also insisted on making three separate wandering monster checks as she fled, each at a 1 in 6 chance of an encounter. 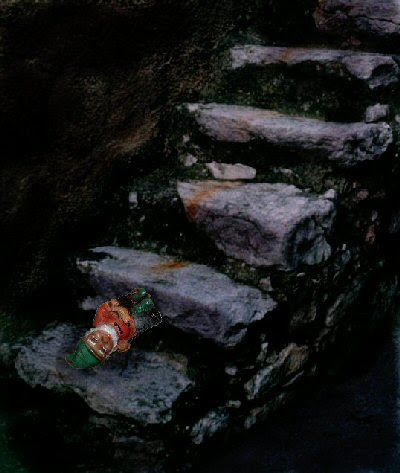 Vale noticed that the steps leading up to level one were now damp, but continued to take them two at a time ... at least she did until an acid-weeping pseudo-pod detached itself from a tread to take a swipe at her ... a "2" ... Vale dashed onward, dimpling the top of the eyeless horror with the print of her shoe.

Crossing level one at a sprint, she tore past the decapitated statue of Saint Mavors and pressed on toward the entry hall.  With daylight in sight, she had little time to react to the crab spider that sprang from above another statue ... a "4" wasn't sufficient to catch her however.  She roasted the beast with "Bernie Hands" [sic], not realizing that a second spider was closing on her from behind.  Luck was still with the lady-conjurer, however, and when the spider failed to force its fangs through her robes she stunned it with a Ray of Frost.  Staying to trade blows struck me as ill-advised, until I recalled that in 5th edition this spell also slows its victims -- Vale made good her get-away.

Meanwhile, down in the guts of level three, Y'draneal, Ivor, and Sergei confronted a trio of shadows--negative, psychic silhouettes burned into the azoth-saturated atmosphere of the dungeon.  Y'draneal maintained his signature move, bolting away from danger at break-neck speed, while Ivor fended off attack after attack (the entities seemed to be drawn to him, perhaps sensing that much of his strength had been permanently drained by their kind in prior encounters).  To his chagrin, Sergei soon learned that mortal weapons couldn't harm these shadows, though his strokes were bold and well-placed.  In the end, the two fighters were able to flee their attackers, and fortunately their armor had been proof against nine separate attacks!

Regrouping, the trio pressed on in hopes of finding another route back to the surface.  In a domed chapel dedicated to Saint Tenen, patron of craftsmen and travelers, they found a thick, blue curtain of coarse felt.  Pulling it aside, they were at once set upon from behind by an animated statue of the saint!

Y'draneal executed his trademark dash, jinking past the imposing animated construct and toward the room's entryway, only to be clothes-lined by the statue's unyielding, outstretched arm.  The fleet-footed elf collided with such force that he turned a full somersault before landing on the flagstones with a sickening crack.


Sergei passed his shield to Ivor and gathered up the stricken elf, only to be hip-checked into the wall by the advancing statue.  Scrambling, he fled through an unexplored door as Ivor did his best to block the pounding stone fists, though the impacts buckled his shield and drove him to his knees.

Staggering into a broad, round chamber, Y'draneal flung over his shoulder, Sergei was confronted by a strange spectacle: three richly carved stone archways stood in the middle of the room, each marked with ancient glyphs far beyond his ability to comprehend.  Stranger still, the odd, polished, black rod that he had stuck into his belt last session began to vibrate of its own accord.  Before his eyes a shimmering, silvery mist filled the nearest archway.

A battered Ivor at his heels, Sergei stepped into the mists and ... found himself in a hall of decapitated statues with bright light illuminating a set of steep steps.

"You got all the way back out!"

Just then the second crab spider, which Vale had narrowly escaped, struck from hiding.  It latched upon Ivor's leg, driving its fangs down in search of some fault in his dented armor.  Ivor responded by flailing with his torch and, in addition to driving the spider away, managed to set his own tunic alight!  Having survived countless dangers, the haggard fighter flailed at his own kindled beard and hair before collapsing within sight of the dungeon's front gate.


Sergei dragged his motionless companions upwards, step by painful step, making the fifty foot ascent to the Red Gates on sheer willpower alone.  By the time he finally reached the surface, however, it was clear that neither Y'draneal nor Ivor had any breath remaining and that he was the only member of the trio who could feel the wind upon his face.

With Y'draneal having at last shuffled off his mortal coil (he did amazingly well for having only 8 hit points), Vale is now the only surviving member of the original "Fabulous Five" who began back in September.

Ivor, NPC-turned PC, was the next oldest character and, like Vale had nearly achieved 4th level before meeting his ignominious demise.

Fortunately, since Sergei lived to tell the tale (and meet back up with Vale at The Green Dragon) AND recovered the bodies of his friends, the party still has Y'draneal's precious maps, including a marked route down to the yet-unexplored 4th level.

Also, Sergei learned the benefits of being the last man standing ... gaining all the experience points that the trio had accrued over the last several sessions.  He is now level three after having played only a handful of times.

The lads were most keen to get back in the dungeon ...

"Can we meet again over the summer and do this?"

... and soon the former players of Y'draneal, Kenny, and Ivor had rolled up new characters to use next week.