Spring Break brought the opportunity to run several more White Star micro-sessions, both at home and in the car while traveling to see relatives.

The Chase: Rocket Wookie blasted off in hot pursuit of Meez-weez and his mobile takka stand.  We devoted a quick session to the chase, using saving throws and Strength checks where necessary.  In the end, following several near-misses from low-hanging pipes and causeways, Rocket Wookie nabbed Meez-weez, who promised to lead his captor to his secret stash of credits.

Claustrophobic: The next session, which ran less than 15 minutes, began with Meez-weez leading Rocket Wookie through a maintenance hatch and along a series of access tunnels ... predictably trying to escape at every turn.  Despite Meez-weez's efforts and a run-in with some critter related to a mynock, Rocket Wookie was able to catch the slippery gambler and drag him back out of the hatch ... only to find a squad of Imperial stormtroopers investigating the wreck of Meez-weez's takka stand!

Firefight!:  In the next session, Rocket Wookie tossed Meez-weez back through the hatch and began exchanging fire with the stormtroopers.  Under heavy fire, the wookie chose to scoop up the gambler and retreat back down the tunnels just as a stormtrooper tossed a thermal detonator through the hatch.  Stumbling through the smoke and steam, Rocket Wookie took a wrong turn and triggered a system purge, dumping the pair down the drain and into the lightless "Sump Level", deep below the city.

Splashdown:  Only Rocket Wookie's jetpack kept the plummeting pair from certain death as they tumbled toward the surface of the subterranean sludge lake, but to Rocket Wookie's dismay the device began to sputter and malfunction!  Landing hard in the vast cesspool, the wookie's frustrated roar echoed off unseen walls.  Soon, however, a pair of greeninsh lights appeared.  Could they be eyes?  Expecting to be swallowed at any second, Rocket Wookie was surprised when a voice spoke from beyond the light, "Ootu waggit do naka?"  Meez-weez and Rocket Wookie scrambled aboard the odd, little fishing skiff (the lights turned out to be lamps positioned at the bow to draw fish) as the pilot turned his craft back toward his village.

Sha-rat Village: Small, rat-like, reptile men, the Sha-rats built their floating village out of the trash and debris that washed down the drains of the megalopolis far above.  A fierce debate broke out over whether Rocket Wookie and Meez-weez should be considered "fish" or not, and eventually they were brought to the tribal shaman to settle the matter. 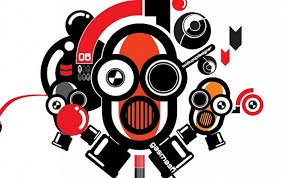 The Godhead: In the shaman's shrine a broad pipe projected from the wall, forming the mouth of a huge, stern droid face painted onto the rusty wall.  As the shaman bowed, the face spoke in a surprisingly alto, ordering him and the guards from the shrine.

It turns out that the droid-head was occupied by Lyn No-moi, a diminutive humanoid who was accidentally washed down from the surface.  Lyn had been hiding out among the Sha-rats until she could find a way back up to the city.  She struck a deal with Rocket Wookie -- if Lyn could help find a way to repair and refuel the jetpack, Rocket Wookie would bring Lyn back up to the city.

Lake Monster: Knuj the Fletchling, a lonely Sha-rat who wasn't a good fisherman but who had a natural affinity for mechanical things, had befriended Lyn and kept her secret (not revealing that she was the source of the droid-idol's voice).  If Knuj could get back to the old Sha-rat village site, he might be able to convert some of the chemicals skimmed from the surface of the scum lake into a crude fuel for Rocket Wookie's jetpack.  The only problem is that the old village site was overrun by a dreadful lake lurker!  So Rocket Wookie, Knuj, and Lyn headed off to the abandoned village to battle the monster (Meez-weez stayed behind, have no appetite for danger), which they were finally able to drive away with the help of Rocket Wookie's one and only grenade.

Again, much of the fun we are having with White Star is due to the very light rules and the fact that we run a single, quick scene and stop after about 10 minutes.  This free-wheeling, completely improvised approach is like a spice that adds flavor to our regular role-playing fare.

Has anyone else fooled around with micro-sessions?
Posted by Jarrett Perdue at Monday, April 04, 2016