Last episode ended with Kenny the Magician unconscious, Y'draneal the mapper having fled, and the bloodied and weary fighting men, Sergei and Hurtis nursing the light of their few remaining torches down in the second level of Dwimmermount.  The beastman tribal room they had finally fought their way into had no less than three exits, and they decided that it was too risky to try and hold it for the duration of a long rest.

A howl, panting, and snuffling sounds from the west tunnel sealed the deal.

Sergei slung his axe and shield, gathered Kenny over his shoulder, and made haste for the stairs with a torch held before him while Hurtis grabbed a heavy, locked chest and trudged after, doing his best to keep up.

"Watch, I'll bet there's nothing in it."

"Yeah, the beastmen never have any decent treasure."

Kenny, despite being in a swoon after having been trampled by a herd of pig-faced beastmen last session, offered quite a bit of input ... so I needn't have feared that he would feel left out of the action.

Two other players whose characters were already safely back in Muntburg were in attendance, and I wanted to get them into the mix quickly, but not at the cost of making a trip in or out of the megadungeon a non-event.

"Yeah, like there's just this big voice telling them how to get out!"

"Pay no attention to the man behind the curtain."

Y'draneal's player was with us and, since he hadn't been separated for more than two scenes, we ruled that he was lingering at the stair.  Needing no torchlight, the elf sped up the steps three at a time and leapt nimbly over the scorched patch of yellow mold, making his Dex check handily.

Hurtis dared the mold next.

"Do you want to discard the chest so that you can see where you are stepping, or risk going straight across?"

The dice continued to love Hurtis and he crossed completely unscathed.

Sergei was last to stumble across the remnant of the deadly fungus, shifting Kenny awkwardly even as more howls and guttural speech echoed up the stair from behind him.  His Dexterity roll was low, and a few of the choking spores were disturbed, but while Sergei's Constitution check meant that he shook off the effects, Kenny wasn't as fortunate and the battered magician began wheezing and convulsing.

"Don't dump me!  Think of all the times I saved you guys!"

"Dude, you hit us with a Sleep Spell."

Figuring that there wasn't much more they could do, the three explorers pressed onward until they came to the door that they had spiked shut an hour before (last session) while fleeing a pack of degenerate Dwimmerlings.

"I want to go over there and get one of those masks we found before."

"We haven’t unjammed the door yet."

"No!  We need to go back to Muntburg so I can rest and heal.  Do I have brain-fever now like Vale?"

"No, you have something worse."

Sergei passed his crowbar to Hurtis who, thanks to an above average Strength, made short work of the door, causing some of the slats to crack and splinter as he forced it open.  I decided that there was a solid 50-50 chance that the Dwimmerlings were still waiting on the other side, but luck was with the party and the vicious little dwarves had moved off in pursuit of some inscrutable purpose.

Y'draneal made it to the Red Gates in no time, but Hurtis fell behind as he lugged the big chest.

"You can see Sergei's torch way ahead of you.  Do you want to drop the chest and catch up?"

"You hear a few echoes and something running somewhere in a side tunnel, but you make it to the doors."

Soon the group reunited with Vale in Muntburg (whose health had declined still further, leaving her only 8 hit points remaining) and made plans to re-equip and return to the dungeon.

But first, there was the matter of Hurtis's box.  Having seen up close the effects of poison needle traps, there was real sense of risk around opening it.

"I'll cast a freeze spell on the box."

"If you do, I'll cast sword on your face!  I risked my life to get this thing out of there!"

Spurning the offer to hire any henchmen (because they soak up experience points), all six active members of the Fabulous Five turned once more toward the mountain.  This time the party seemed reasonably balanced:

Even as Kenny picked at the weird, yellow crust that kept forming at the corners of his mouth and eyes, Vale's player began an impromptu dungeon song ... a show tune of course, taken from "Dwimmermount the Musical."

"Can we go five minutes without turning this into a musical?"

And so off they went, once more in search of the Shrine of Luck and a fulfillment of Vale's long-standing (and long-overdue) obligation to Saint Tyche ... and walked right into a Dwimmerling ambush in the very first room of level one.

Surrounded, Y'draneal was forced to finally make use of his sword, but he struggled to bring the weapon to bear.  Avoiding the fighters in the front rank, the hairy, naked, deranged dwarves flung themselves at the spellcasters from either side and only Vale's deadly accuracy with her Bernie Hands [sic] spell kept the group from being overwhelmed.

Once about a dozen of the gibbering little folk had been struck down, the rest withdrew out of sight but kept steady pace with the explorers along parallel halls, waiting for their next opportunity to attack.

Fortunately nothing else hindered the party's descent to the level two Reliquary and they explored a number of rooms in quick succession.  As Vale urged them onward, it became clear that she had finally begun to take pledge to Tyche, patron saint of Luck, in earnest.

Discovering a room bisected by a wide, mist-filled crevasse, Hurtis was nominated to try and leap the pit ... which he promptly did, but only just barely.  Discovering a door on the far side, flanked by a pair of imposing statues, Hurtis was instructed to wait there while the rest of the group sought a hallway that would connect via some yet-undiscovered hall.

"You're just gonna leave me?"

The next western hallway led to a door.

"But what if it isn't locked?"

"Then it's gonna be picked one way or another."

Y'draneal's skill was no match for his confidence, however, and as he struggled to free a jammed pick the door was jerked open from within.  A squad of the great dwimmer-goblins peered out at the group, weapons ready.

Things would have probably gone ill for Y'draneal had Vale not immediately used a spell to help her communicate.

"Hey!  Hey guys, we mean no harm.  We're just looking for the Shrine of Saint Tyche.  Can you help us out?  We know where there is this sweet sword up on level one, just past the room where those crazy, little naked guys poured all that oil out.  Do you know that room?  You could go get it.  The sword is probably still right there for the taking."

After a bit of discussion among the big goblin-folk, a bruised and battered Yang was dragged into view [Yang had been left to die when the party fled a battle with the great goblins several sessions prior -- an ally of the adventuring band, The Seekers, Yang's loss has become a point of tension between the two formerly friendly groups].  Without blinking, one of the goblins cut Yang's ear off and tossed it at Vale's feet.

"Bring us the sword and you can have more of your friend."

"Woah!  Okay, hey.  No need to go cutting things.  We're just looking for the shrine.  And I'd like to apologize for whatever went on before ... these guys are kind of idiots between you and me.  Look, we can pay you if you show us the way."

Vale kept up a non-stop barrage of fast-talk and eventually the dwimmer-goblins were joined by a leader.  Vale spotted opportunity.

"Look man, between you and me, we both know what it's like when your lackeys go and do something stupid, am I right?  We can pay you well for the men you lost and more if you show us the way to the shrine.  This could work out for both of us."

Lonely and feeling forgotten, several halls away Hurtis took a running leap across the crevasse, and again he dared certain death only to walk away without a scratch.  His arrival went unremarked as he trotted up behind the group.

"Where were you guys?"

Finally a deal was struck.  If the party disarmed and handed over their gold, then some of them would be admitted to the halls held by the goblins.  Kenny and one of the fighters remained behind to watch the weapons.

"If you guys aren't right back, we're coming in."

With Vale still chatting the guards up, several party-members were ushered past a watch post and into the presence of the dwimmer-goblin's centurion.  Vale turned the charm and fast-talk up still more while the goblin chief listened.  Finally he gave his orders.

"We seek the Hall of Portals below, but the route has not been secured.  You will descend yon stairs and serve my troops as scouts.  If you agree to this, we will let you go to your shrine."

"Agreed!  Oh, and we left a couple guys out in the hall.  Could you send a message to them to let them know the deal?  We will need weapons if we are gonna scout for you ..."

"You'll be given what I decide you require."

So now it seems the party has a new boss calling the shots! 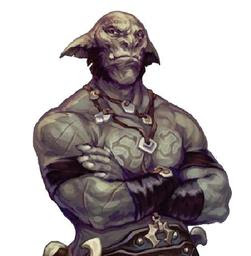