On a whim, I recently picked up the White Star RPG by James Spahn and decided to give it a whirl one afternoon.  It's basically OD&D repackaged to run rules-lite Star Wars, Star Trek, Battle Star Galactica, Firefly, or something similar.  I'd already introduced the troops at home to Star Frontiers, and it didn't really grab their attention, but I figured that the familiar mechanics of White Star might make sci-fi roleplaying more accessible for them. 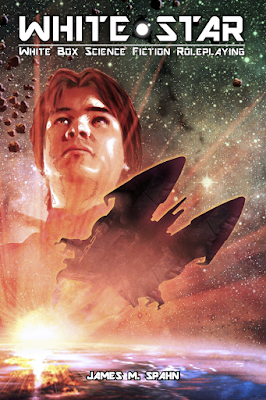 My older kid, who gravitates towards all things brave and noble, thought she'd like to try and play a Jedi (called a "Star Knight" in White Star).  Their prime requisite is wisdom, which fits pretty well as these guys essentially work like clerics, so as she starts her 3d6 stat rolls she's hoping for a decent score there ... and her first toss (strength) is a natural 18, something I've only ever seen happen once or twice before.

"Um, I think you're going to end up with a mercenary or an alien brute, honey."

"An alien brute?  Oh, you know, any big, tough alien-type ... like a wookie.  They sort of do the same job as dwarves in this."

Well that pretty well sealed it.  Dex and Wisdom both came in pretty modest while Con was up in the bonus range.  Definitely alien brute material.

Her next really defining characteristic came when she was rolling for starting money (credits) ... again, the old 3d6 x 10 that I've been using since the 1980s and which comes without pause for thought.  A 16! That's one well-heeled wookie!

Looking over the rules, we realized that a high-strength wookie in hand-to-hand combat could be more lethal than blaster fire!  The problem would be, how to get him/her into the fight quickly?

That didn't leave enough money for a blaster, but she could afford a single concussion grenade and a pouch to keep it in.

"Okay, so you are approaching the space port, looking for a way to get off world because wookies are outlawed here.  You round the corner and there are two storm troopers!  [rolling] You are very close.  Roll for surprise! [rolling]  Okay, looks like you have surprise.  Do you want to fight or run?" The wookie's attacks buffeted the storm troopers without cracking open their armor, and stuck in melee they couldn't make proper use of their blasters without risking hitting each other.


White Star doesn't have morale ratings for NPCs (a really important rule in old school D&D-style games), but Spahn made the very clever suggestion of using a single, unified saving throw to do double-duty.

I figured that, surprised by an angry wookie, a morale check was in order.  The troopers bolted, one of them failing them badly enough that I ruled he had dropped his weapon in his panicked flight.

A successful first outing for White Star and Rocket-Wookie!
Posted by Jarrett Perdue at Sunday, March 20, 2016