Tuesday was our twentieth session exploring the Dwimmermount megadungeon and we had a full table of six players.  Here are our explorers:

After a bit of shopping in the humble market square of Muntburg, the group headed straight for The Reliquary level in hopes of finding the lost luck shrine of Saint Tyche.


They paid the now-standard toll to a band of sentient rats (Vale did the negotiating) and, noting traces of luminous slime on the walls and floor, they began to poke around some unexplored corners of the dungeon's second level.

Eventually, entering a chamber heaped with moldering sacks, the group was cheered by the prospect of some easy loot.  The adventurers spread out in a scramble to tug open the sacks and lay hands on the goodies ... and were shocked when withered, grayish hands reached out of the sacks! 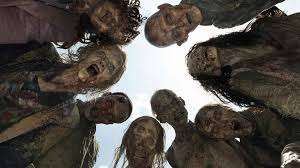 Suddenly the party found itself surrounded by shambling deadites*!  A fierce battle ensued as Vale back-peddled to the doorway and started a count down to unleashing her Burning Hands Spell.  Kenny wasn't inclined to wait, however, and threw his Sleep Spell.  His jaw dropped when two of the fighters slumped to the floor, but the merciless dead remained completely unaffected!

As Sergei was dragged to the floor with decayed teeth locked in his calf, Vale unleashed her inferno, destroying the battered dead in a single strike.

Beyond all hope, despite being reduced to zero hit points, Sergei managed to pass his fifth and final death check, meaning that he was maimed, but would live.

Bearing their wounded and pausing only to rout a roving pack of beastmen with Vale's Turms Termax impression, all eight members of the Fabulous Five trooped back out of the dungeon and to the sanity and safety of Muntburg.

* I'm adamant in each of my campaigns about NOT using the Creole word for animated corpses, feeling that it both misses the pseudo-European feel of the setting and leaves the players with a bunch of OOC expectations.  Instead, all corporeal undead get described as "deadites."  Not knowing a mummy from a ghoul without careful observation maintains the tension nicely.
Posted by Jarrett Perdue at Thursday, March 24, 2016