To prep for our latest session I spent a couple days brushing up on Dwimmermount ... reviewing the overview of the recently-discovered second level, checking the factions chart and briefs, brushing up on which areas held which secrets from the history of Telluria, and re-reading the room descriptions for those areas the adventurers were most likely to visit ... and so naturally my players decided to forsake the dungeon and head back to the city of Adamas.


I'm still trying to refine my approach to urban adventures and I'm certainly not satisfied yet.  I've replaced the single card for each district with a small, color-coded deck.  Players can travel to any district in the city and pull the cards of their choice (allowing them to shop, meet key NPCs, or collect rumors) only after risking a "street encounters" roll (works like a wandering monster roll and of course not every random encounter is necessarily adversarial). 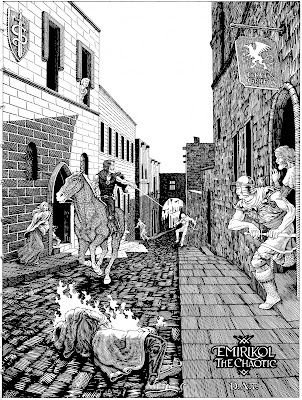 While in town, Y'draneal did a bit of shopping before heading off for some up-scale carousing.  I've made a house rule tying hit dice rolls when leveling up to carousing expenditures ... spend lots, eat well, and your minimum hit points go up.  Having twice rolled only a single hit point when leveling up, Y'draneal was eager for some posh living.

Ivor hung around the seedy Excastrum district (beyond the city wall), but decided not to risk a carousing roll on Madame Dagada's pleasure barge.

Meanwhile Vale was busy.  Following a tip from the sentient rats, she headed for a sewer pipe in Westmarch Lane and managed to meet with emissaries of the Rat Boss.  Enduring the jibes of the rats and aided by her Comprehend Languages spell, she eventually managed to smooth things over with the rats and learned that they had a platoon searching Dwimmermount in hopes of finding a way to prolong their lives and stave off a chronic illness that they suspect originates from the same magical forces that grant them their remarkable intelligence.

The group also visited Master Marmaduke the sage, managing to bargain for a copy of a formula for the Fog Cloud spell in exchange for first pick from among any books recovered from Dwimmermount.


Finally, an hour into play, I ruled that Vale began to feel the grip of brain fever again ... the illness that had nearly struck her down during her visit to the stews of Excastrum.  She hurried off to the Shrine of St. Tyche to seek a cure, only to learn that she had apparently earned the ire of the fickle Lady of Fortune.  She had previously failed to place the portable shrine to Tyche in the long lost Hall of Fate somewhere in level two of Dwimmermount as she had promised.  No cure would be forthcoming until her quest was fulfilled!

So, at last the explorers headed back to the megadungeon.  However, much to my surprise, rather than go look for either the missing altar or the hall in which to place it, the group decided to trundle off to a yet unexplored corner of level one.  It seems that nothing was going to come of my preparation!

Discovering a large, animated, metal face, Vale abandoned her usual diplomacy and blasted it with a Ray of Frost.  Caution gave way to guilt however, as the glazed face continued to stare passively, and she decided to thaw the bearded visage with her Burning Hands spell.


The creaking sounds of cooling metal masked the stealthy approach of a pack of porcine beastmen who burst in upon the party!  Ivor's henchman was slain instantly by a hurled axe and things were touch and go for several rounds until Y'draneal's deadly archery finally managed to turn the tide.  As the beastmen finally broke and fled, Rufus the Forester was also numbered among the dead.

Where will the adventurers head next week?  I honestly haven't the foggiest (but I'll probably veto Adamas).
Posted by Jarrett Perdue at Tuesday, January 12, 2016