After a two-week hiatus for Christmas Break, my intrepid dungeon crawlers got right back to business exploring Dwimmermount, the 400 page megadungeon first imagined by James Maliszewski. 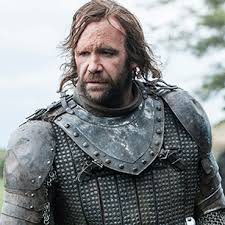 The player of Dren, the sinister cleric sent to ensure that the party installed the portable altar to Saint Tyche properly, wasn't present (he was at debate team I think) while the player of Ivor the fighting man henchman-turned-player character was able to attend, having shrugged off his pre-holiday cold.


We hand-waived the swap in cast ... with the altar stolen, possibly by a platoon of sentient rats, perhaps Dren reported back to his superiors for instructions.  As for Ivor, we figured that he may have simply been watching the baggage in the prior episode and ventured into the ancient ruined fortress to check on his chums.

While the four fighters (Curteff, Yang, Ivor, and Rufus the NPC hireling) and Vale the Grey (wizard) poked about in a chamber with a half-dozen strange, four-foot, marble columns, Y'draneal the self-styled "Dungeon Queen,"* peeked down a set of steps, giving the adventurers their first proper look at level two of the dungeon.  What he saw was not immediately encouraging: a phalanx of shiny, black skeletons barred the bottom of the steps.

The guys have never been tempted to fight fair, so a shower of arrows soon began to whittle the silent guardians down.  However, growing a bit bored of the pace after a couple rounds, Curteff, Yang and Ivor plowed down the steps to finish the skeletons off.  Vale continued to blast away with Ray of Frost from behind the group, only managing to hit Curteff once, and despite ice on the steps, heaps of loose bones, and at least one well-timed tumble down the stairs, the party managed to prevail without any losses of their own. 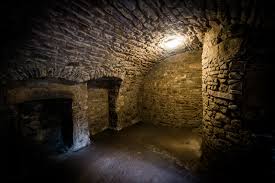 Here the organization of the massive Dwimmermount book failed me ... details of the types and eras of construction for different dungeon levels aren't necessarily found alongside the room descriptions for those same levels, and the compass orientation for the maps of successive levels sometimes shifts (e.g. level one, north is on the left side of the map; level two, north is at the top of the page) ... I played through, but probably didn't give the group's entry into this lower dungeon layer the distinctive elements that the original ideas found here deserve.  No biggie, just an opportunity missed.


Confronted by five different unexplored hallways, but finally wise enough to avoid splitting up, the explorers resolved their different opinions by picking the one direction nobody had voted for.

Finding a closed door, they again gave evidence that they have begun to grow a bit dungeon-wise by having Y'draneal check the door for traps before Ivor, Opener of Doors, thrust the aged portal aside.

From the ossuary beyond came a grim, unearthly, red light and a necrophidius arose to confront the party, mesmerizing first Ivor then Yang with its dreadful gaze!  The rest of the group seemed about to cut their losses, leave the stricken fighters behind, and run: 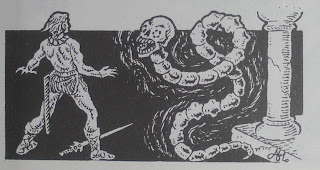 "I'm headed back for town."

"Ooh, I want to take it [the dead monster] and wrap it around my staff!  That'll be awesome."

Y'draneal was willing to chance one more door however, and his persistence was paid off by the discovery of a small treasury.

The adventurers made swift work of plundering the small chamber before retreating back toward the Red Gates and the surface.  Their progress was halted, however, by the same sentient rat platoon that has been busily exploring the dungeon in search of ... something.  Despite the party's former treachery and hostility toward the rats, Vale was able to negotiate a treaty by offering a significant bribe.  That accomplished, the group retired to Muntburg to rest, sell off treasure, and prepare for their next delve.

* We use chess pieces (and the occasional Lego) as cheap, durable miniatures.  Despite the fact that the party is led by Vale, a female magic user, Y'draneal's player always chooses the queen as his piece, so the name "Dungeon Queen" naturally stuck.