Getting Around Town: Urban Adventuring


I have never been satisfied with my approach to urban adventuring, so when the middle school players in my Dwimmermount campaign announced their intent to visit the city-state of Adamas, I felt the push to try something new.

Back in high school, when I played AD&D weekly, I occasionally used the big, fold-out city maps that came with the "City System" boxed set ... but at five and a half by eleven feet ... the maps certainly had a kind of grandeur, but were very hard to actually use at / near the table.

The players never really learned their way around ...


One solution was to simply label the map, but that still fell a bit flat for me, perhaps because the names alone still didn't empower the players to make informed choices.

Recently, however, I read Roger G-S's musings on a Street Guide Without Streets.  Mphs.Steve's comment got me thinking about what old maps of cities actually look like and how I can offer my players a shorthand description of exactly what they can do in various districts.

Here's what I've worked out so far: 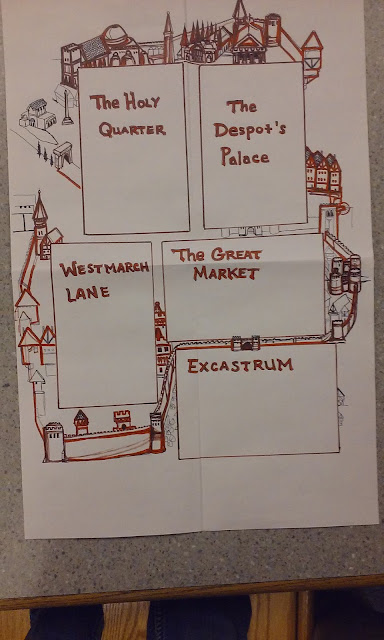 As we add locations to a district, I can just add additional cards to that district's pile without the bother of re-keying the map

The first run went reasonably well, with the players focusing on where they wanted to go and telling me their next move.

"I want to go to the market stalls."

"I'm going to the Shrine to St. Tyche to ask about a healing spell."

My job became as simple as rolling for street encounters and animating key NPCs as they visited their chosen locations.  No flipping around through a city sourcebook, and no delays at the table!

One problem was that the district card text was too small for each player to see from their seats with ease.  Perhaps each location in a district should get its own card and the players can simply sort through the deck when visiting that part of the city.

Finally, it was clear that miniatures would come in handy when tracking movement from one district to another.
Posted by Jarrett Perdue at Wednesday, November 25, 2015