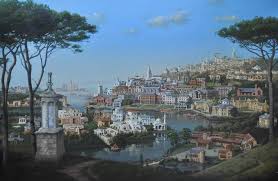 With Vale and Ivor’s players away this week, we asserted that they had journeyed to the nearby city-state of Adamas to spend their loot while Grim (disgraced soldier-turned rogue) and Y’draneal (elven rogue) continued their exploration of the legendary mountain fortress in hopes of making another big score.

The pair of would-be burglars (now second level) were joined by “Blaze,” who apprenticed in spellcraft alongside Hakka (and played by Hakka’s former player) and Curteff, a doughty sell-sword.

Curteff’s player was another of a growing number of club alumni who have returned from high school to help run games and mentor middle schoolers in the fine art of the dungeon.

This particular player had also participated in my strategy games elective, and some of his exploits are recounted elsewhere in this blog.

Since leaving middle school, he has successfully hooked up with a weekly D&D 3.5 group at The Game Vault, our Friendly Local Games Store, and I’m gratified to think that I may have had some hand in that.

After a bit of mucking about in Muntburg, the group unfolded Y’draneal’s map and continued exploring heretofore unexplored areas of the dungeon’s first level.  With Vale away, the party elected to steer clear of chambers where they had met the small, deranged men in prior sessions:

“Yeah, they’ll probably attack us with their shovels or something!”

With Grim scouting ahead, the group soon came upon some more of the porcine beastmen that they’ve faced before (we still haven't used the word "o_ _" in this campaign).  Curteff showed both indomitable courage and deadly skill with his blade and, supported by a bit of arrow fire, he soon dispatched them.

The adventurers discovered that the beastmen had a captive – a thick-bodied, bearded man of no more than a child’s height.  Blaze was able to identify this fellow as a “Dwimmerling” or “dwarf” in the common speech … a rare creature of magical origin, said to originate from somewhere within the Dwimmermount.  The creature offered them a reward if they would free him and bring him to safety, and the party readily agreed.

By this time, a second pack of beastmen had crept up behind the group and launched a surprise attack, but to little effect.  Curteff again cleaved through their ranks and set the creatures to squealing, shrieking flight, though by this time the group has seen enough to have a pretty clear idea of what section of the dungeon these enemies keep sallying forth from.

The group did a little more exploring before leaving the ancient fortress; enough time for Curteff to discover that roasted beastman does indeed smell like pork, Y’draneal to receive a near fatal bite from some hard-shelled arthropod, Grim to start a fire, and Curteff to claim a two-foot-long insect as a pet.  The dwarf proved good to his word and the explorers were rewarded with several heavy bars of silver, earning and spending enough for Curteff to gain second level.

A fine little session which developed a few more patterns and mysteries within Dwimmermount.
Posted by Jarrett Perdue at Tuesday, November 10, 2015