In our eighth Dwimmermount session, the adventures took a break from the mega-dungeon and its mysteries to travel to the nearby city-state of Adamas to spend their loot and gear-up for their next foray.


This was our first opportunity to work with my "district deck" approach, and it empowered players to make their own purchases with minimum intervention.


As the characters moved from district to district, the dice produced a couple random encounters:


Vale contracted brain fever while trying her luck in the gambling dens of the Excastrum district.  Her condition steadily declined until she was finally able to arrive at an arrangement with a priest of St. Tyche, requiring her to move a portable altar into Dwimmermount. 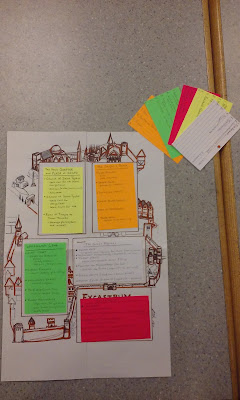 Meanwhile, Grim was interrupted while browsing the stalls of the Great Market by the hue and cry being raised.  Already bearing a thumb-brand for theft, the watchmen were quick to take him into custody and proceeded to handle him roughly until he bribed them for his release.

In our last half hour of play, the group returned to Muntburg and once more passed through the Red Gate of Dwimmermount to press a bit farther into the dungeon, routing a fresh pack of beastmen and closing in on the suspected location of a staircase leading deeper into the ancient mountain fortress.

I appreciate the way that awarding experience for treasure spent creates a rhythm that carries the explorers in and out of the dungeon at intervals, while always offering players a default goal to pursue whether in town or exploring a labyrinth.
Posted by Jarrett Perdue at Sunday, November 29, 2015