Crouched once more on the doorstep of Dwimmermount, a party of 5th edition characters (played by four of the 20-odd middle schoolers in this year's after school club) prepared for their second descent into James Maliszewski's megadungeon.


Rogues Grim and Y'draneal (an elf whose skins always smells faintly of cinnamon), along with Ivor the northman hireling, probe into the western halls of the first level, and passing a ruined throne they stumble upon yet another squad of porcine beastmen! 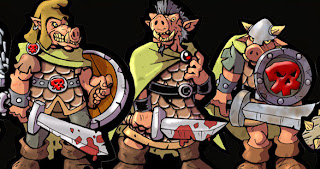 Seeing that they are outnumbered, Y'draneal once more shows himself to be canny in a way befitting a much more seasoned dungeon crawler, and he dashes back toward the Red Gates rather than risk battle.

Meanwhile, Grim has lingered a bit while exploring a side passage and the dice take a turn, indicating that a wandering monster has crept up upon him.  A giant spider springs from behind a statue of Mavors and delivers a nasty bite, but Grim's thick leather glove turns its fangs and he isn't poisoned.  A quick stroke with his newly acquired handaxe -- a 20! -- and the creature is dispatched. 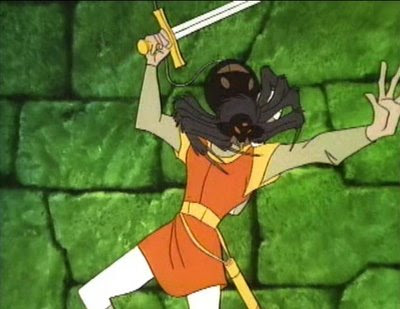 Grim turns and sprints off behind Y'draneal, the beastmen in hot pursuit.  They chase him to the very threshold of the dungeon where a desperate contest begins: the beastmen trying to heave the doors open and drag Grim, grasped by his ankles, back into darkness while the remaining party members try to pull the former soldier free and heave the doors shut.

Several lucky attack rolls thin the enemy ranks and Grim is saved.  The dungeon dwellers fail a morale check and flee shrieking back into the halls below.

After a pause to catch their breath and establish marching order, the party proceeds back through the Red Gate, reasoning that should they meet more beastmen all they need to do is impersonate legendary wizard, Turms Termax, scream a bit in high Thullian, and surely the degenerate creatures will go packing.

Hakka the wizard's player, well aware that so far the party has recovered no treasure apart from a strangely-inscribed, cylindrical, leather container, also voices that perhaps looting the bodies of the vanquished beastmen might reveal something of value.  While this suggestion meets with the party's approval, they soon discard it, striking out instead to explore new halls to the east side of level one in hopes of finding a set of stairs that will lead them down to level two ... which they assume will hold far better plunder.

When they encounter a strange, brass machine, Vale the wizard decides to smash it.  I don't think that this was simply because her player views any imaginary world much like the landscape in a Lego console game ... where everything exists simply to be smashed ... but rather because of anti-Termaxian sentiment combined with her prophetic knowledge that something is stirring and waking deep within Dwimmermount.  Given the heavy techno-magic motif throughout the dungeon, we'll just have to see how this plays out over time.

Picking their way across a oil-slick chamber, soon the group is confronted by a small, angry, wild-haired man who screams at them in an unknown language.

"What if that is what Dwimmermount transforms you into?"

"I think he's angry because he doesn't have any pants."

Grim's remarkable luck, which has carried him through more than one encounter, stays true, and he rolls a natural 20 on his Charisma check while trying to make friendly and non-threatening gestures to mollify the angry dwarf, so avoiding an attack.

In an effort to sustain the peace, and perhaps negotiate for passage, Vale presents the little fellow with the gift of a shovel.  Instantly the darkness of the cave sprouts identical, hairy little men who begin to fight for possession of it, one even drawing a sharp knife and turning upon his fellows in his rage.

After a brief retreat from the violence, Vale casts her Comprehend Languages spell and learns that these strange dwarven creatures serve someone they call "Father Guran" ... but that mystery will have to wait for another session. 1. Though I've run 30 sessions of 5th edition D&D (well, technically 33 now), I still struggle with how to narrate hit point loss ("The spear point bites the wall just beside you, take 3 hit points."  "Wait, but you said the spear missed ...").  I tend to narrate hit point loss as increasingly severe injuries ... but that just doesn't hold up in 5th edition where an 8-hour rest restores ALL lost hit points.  I may have to house-rule this just because I can't seem to get the hang of the purely abstract hit point that goes and comes so swiftly.

2. Managing light and similar resources (notably oil) is a big part of what I think of as old school style play.  I though that inclusion of Light as an at-will cantrip would wreck sense of darkness as the ultimate enemy when entering the underworld.  Thankfully, that hasn't really been the case.  Even with two different Light spells running simultaneously, Dwimmermount is still brooding, mysterious, and threatens isolation and death at the hands of unseen assailants.

3. 5th edition orcs are crazy.  In pre-3rd edition terms they are basically modest hit point ogres.  Rather than change the numbers of foes, I've swapped stats for lesser critters ... in this case goblins swapped in for orcs.  As the party advances in level I guess I will need to do this less often.

4. I still forget all the fiddly monster feats and such.  I can't explain it really.  I wouldn't forget about a ghoul's paralyzing touch, but a goblin's ability to disengage as a bonus action or whatever ... ?  Nope, those odd little tactical quirks
A.) aren't intuitive,
B.) aren't especially rational or consistent within the game world (shouldn't an elf be just as slippery as a goblin? What about a satyr? Why not a leprechaun?)
C.) don't seem to make encounters all that much richer when I do remember to include them.

5. Leveling up: I thought that the absurdly fast advancement rate of 5th edition would be a stumbling block, but here we are at the end of session 3 and nobody is really close yet.  I'm guessing five sessions will be required before surviving party members reach 2nd level.  That doesn't seem to be all that far off the pace of the original Dwimmermount campaign if I'm reading the posts on Grognardia correctly.