Today in my Homeguard BECMI D&D Campaign, where we are carving our way through classic module B5 Horror on the Hill, things moved forward in two short bursts. 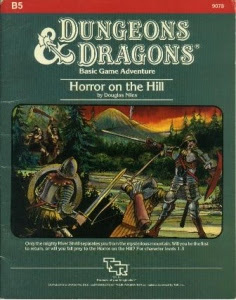 Last time a brave thief with an invisibility potion learned that yes, there was indeed a red dragon under the eponymous hill, and second, the terrible beast had struck a bargain with the hobgoblin king who rules the halls below the ruined monastery.  The dragon would serve as the hobgoblins' secret weapon in their pending assault on Gideon's Fort (borderland bastion of the lawful Realm of Man), and in exchange the hobgoblins would help the creature relocate its precious hoard to a secret location.

Having reasoned that the hobgoblins massing beneath the hollow hill must be preparing some way to cross the broad river west of the fort, half of the party paddled across in small craft and succeeded in finding the sheltered cove where four large, crude rafts were being prepared.  They rescued the enslaved work crews, scattered the bugbear overseers, and slew the minotaur captain before stealing two of the rafts and making their escape.

Meanwhile the other half of the party crossed the river at a lower point in hopes of scaling the slopes of the hill unseen in order to find Leodin, the mysterious wizard-benefactor who had been urging them on in their quest.  Unfortunately their coracle was spotted, the alarm raised, and a squad of bugbears and hobgoblins were dispatched to deal with the adventurers.  The party's halflings prepared an ambush, but against the odds they were spotted and when an evil cleric was seen directing the monsters things began looking a bit grim.

It was then that Charlotte, the lowly first level magic-user (played by my eight-year-old), cast her only spell for the day: Charm Person on the cleric and things took an abrupt turn. 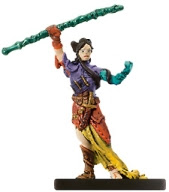 Failing his save, the cleric assumed that he recognized the neophyte spell-caster.

"Quickly, come with me while they deal with the intruders."

"Yeah, they are only fighting because your hobgoblins surprised them.  You should tell them to stop."

Soon the party was escorted to the top of the hill to meet the cleric's master, a "Wearer of Purple" in the Cult of the Dragon.  Over the next twenty minutes or so of play the be-spelled bad guy spilled the beans on his group's nefarious plot to see the Dragon Queen rise from her slumber to rule the world, Leodin was located, and (courtesy of Charlotte's Sleep scroll) the group escaped back down the slopes of the hill unscathed and considerably wiser.

Next weekend I plan to dig out lots of minis along with some old MARX style cowboy playset props and run The Battle of Gideon's Fort! 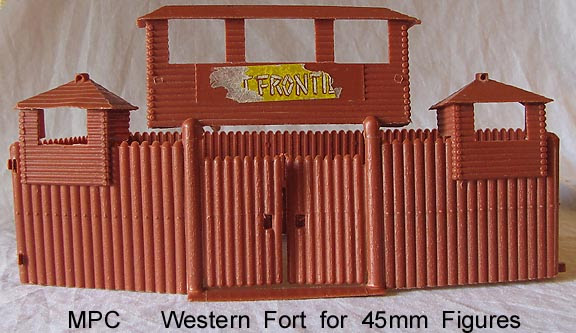 I'm building plot connections so that we have the option to jump over to 5th edition module, Hoard of the Dragon Queen once we are done with Horror on the Hill, though I've introduced leads for N1 (Against the Cult of the Reptile God) and B7 (Rahasia) as well.  It will be up to the players to pick which direction to go of course.