Homeguard: The Battle of Gideon's Fort

My kids and their grade school aged chums have been chopping away steadily at classic TSR module Horror on the Hill since the spring.  They've crossed swords with dozens of hobgoblins, tangled with their first troll, followed the clues found in a wizard's journal to navigate the dungeon below, rescued a dwarf and a thief held as thralls by the ruthless Hobgoblin King, struck a bargain with the mysterious wizard Leodin, solved a two-part puzzle to gain entry to a magic fountain hidden within the ruined monastery, discovered the red dragon (!) resting in the halls beneath the hill, and learned of an alliance between the goblin-folk and the Cult of the Dragon.

This weekend, by cover of night, the allied forces of chaos swarmed out of the eponymous Hill, crossed the river on rafts, and launched their assault upon Gideon's Fort, the modest bastion of law that has served as the base of operations for the characters thus far.

The session opened with each of the five players choosing where to place sharpened posts (intended to make it more difficult for the dragon to land inside the fort), pairing up spellcasters with plate armored bodyguards, and dispersing around the interior of the fort so that no single gout of dragon flame could incinerate all of them in one fell swoop.

Forewarned due to the daring reconnaissance of Mitchell the Robber, a determined force of defenders was assembled:


The attack opened abruptly as two squads of kobold sappers assaulted a poorly lit section along the southeastern face of the palisade wall.  A dozen or so lurked in the darkness using darts and javelins to thin the defenders while the rest dug, chopped and climbed in an effort to get past the wall.  Two small breaches were forced and soon defenders were streaming in from their posts to cut the kobolds down.

Meanwhile, on the northeast side of the fort, Jonathan struggled to understand one of Leodin's lizardmen as it emerged into the light of a flare and rasped something up at him.  Soon the message became clear, however, as a squad of bugbear shock troops dashed silently out of the night.  They mounted the wall with ease, battering a cleric and several other defenders to their knees as they prepared to sweep their section of the wall.

A web spell slowed the bugbears a bit, but despite the silent ferocity of their initial onslaught they abruptly lost momentum, allowing defenders to shift in order to contain them.  Perhaps a miscommunication among the enemy ranks had led the bugbears expecting to join up with another unit (or perhaps it was just two rounds worth of single-digit attack rolls -- sheesh).

Then a cry went up from the fort's western watchtower -- Sayana the elf spotted a pair of enemy rafts about to land!

As the forces of chaos began to disembark, torches flared within the grove south of the fort.  Flanked by a half-ogre bodyguard and a gaggle of evil clerics, the huge Hobgoblin King appeared.  Before him a row of hooded figures were made to kneel, arms behind their backs.  The wicked creature hailed the defenders, "Throw down your arms and surrender the fort to us or these captives will die!"  Blade, impetuous veteran of numerous battles, was immediately suspicious.  His player started asking questions about the captives -- what could be seen of them and what type of folk were they?  I allowed a roll and, sure enough, when one of the "captives"shifted position a bit it became clear that his hands weren't really bound behind him at all.  The defenders jeered at the apparent ruse and shot a few arrows to show the hobgoblin lord that his trick would not catch them off guard.  Their masquerade abruptly over, the figures stood and removed their hoods, revealing the cruel faces of a party of orcs. 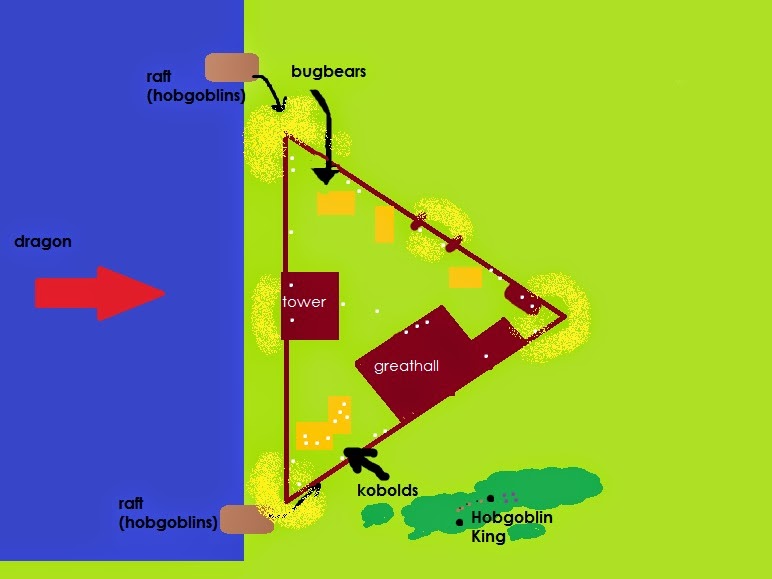 The Hobgoblin King had a final card to play however.  He lifted a brazen horn to his fanged lips and blew three sharp blasts.

But for Mitchell's daring spycraft, things would probably have gone much, much worse for the defenders, but as it was the players met eyes across the table, "The dragon is coming -- get ready!"  Sure enough, with a rush like the sound of wind through pine trees, a fierce red dragon dove and wheeled above the embattled fort before coming to land atop the main watchtower!

The response, carefully planned ahead of time, was immediate.  Dragons are so terrible, in part, because of their nearly-impenetrable scales (a red dragon's AC -1 means that most defenders would need to roll a 20 to hit the beast), but blood had been spilled and lives lost in order to keep the elves and other magic-users out of the fight until this point.  With their enemy clearly in sight, Magic Missiles streaked unerringly from six separate locations to strike the creature!  Shocked by this abrupt turn-about, the dragon suddenly found itself seriously injured, half-blind, and confronting a half dozen spellcasters of unknown capability rather than simply roasting a handful of panicked men-at-arms.

Enraged, and suspecting treachery on the part of its hobgoblin allies ("They lured me into this fight hoping that I'd be slain so they could take my gold for themselves -- the filth!"), the dragon blasted the top of the tower and directed a few more gouts of flame at most dense clusters of troops (at this point with no regard for which side suffered more) before smashing the landing rafts and winging off into the night, stung by more arrows as it went.

The hobgoblins watched in dismay as their "secret weapon" left them stranded on the enemy shore and began a desperate fight to the finish.  A half dozen defenders sallied to strike against the Hobgoblin King and his bodyguard (both statted as max-hit point ogres), and though half of them fell, Huey the Elf was finally able to drop the enemy leader.  The battle for Gideon's Fort was over.


Does anybody have an opinion on how rapidly a dragon should recover lost hit points?  The Homeguard gang is thinking about trying to finish the beast off before it can regain its strength.
Posted by Jarrett Perdue at Wednesday, November 26, 2014