We got a solid start to my after school 5th ed D&D middle school game ... the five guys present at the table (two so stoked they showed up in cloaks / cowls) even recapped the main points of the tactical advice that I had shared two weeks prior without any prompting from me.

"Make sure you have an escape route if you don't know how many monsters you are up against."

"Put the armored guys up front and the squishy ones in the back."

I slapped on a somewhat ham-handed back story to explain why this third group of adventurers were making the trek along the Triboar Trail to Phandalin:

"You are bondsmen and men-at-arms in the service of Sildar Hallwinter.  In a flurry of excitement your master rode for Phandalin a week ago in the company of a dwarven prospector, but he has not sent for you as was planned.  Indeed, news from the latest travelers suggest that Hallwinter never arrived in the western hamlet at all and has instead gone missing!  You have set out along the Triboar Trail to find him."

I decided that Hallwinter's dead horses, first encountered by middle school party version 1.0, would have been pretty thoroughly scavenged over the past week, but still tossed a few (basically harmless) wolves in and added some skittish crows to telegraph the encounter.

The guys went into fast forward at the prospect of a combat encounter -- some wanted to avoid what they perceived as potential danger, others were all for setting up a crossfire ... soon parts of several plans began to be implemented and we had one armored character up a tree while the leather-clad rogues advanced ahead of the stalled fighter who wouldn't budge an inch.  They could see things starting to unravel and started to move back into close formation when the halfling cleric, who could speak to animals, started taunting the largest wolf from his perch in the tree.

When considered alongside the multiple occasions when the group has been intentionally targeted by their own Sleep Spells, I think this is a significant data point suggesting that ALL SPELLCASTERS ARE CHAOTIC ... at least all the ones played by middle schoolers. 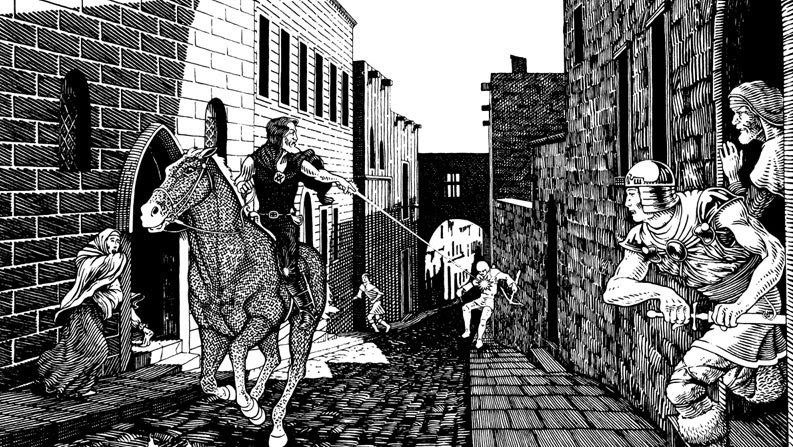 The alpha wolf was content to threaten and snarl rather than actually attack, so the cleric blasted him with a (absurdly overpowered?) Guiding Bolt for 4d6 hit points.  The wolf survived, but fled smouldering into the forest.  Elated and spouting megalomaniacal ravings, the halfling bullied the remaining wolves into submission ("I am the KING WOLF!  I am the WOLF GOD!  I will make a wolf army and we will take over everything!") then, over the protests of his fellows, he set out in pursuit of the wounded alpha with plans to kill, heal, or tame him (these "plans" varied moment-by-moment).

They split the party.

Then, frustrated over their inability to follow their own advice, they split the party again.

While some adventurers tramped along a small, branching trail, the halfling plowed headlong through the woods and eventually into the arms of a bemused but opportunistic orc hunting party.  5th ed orcs are tough ... and when wielding great axes they can drop even a 3rd level  character in a single hit. 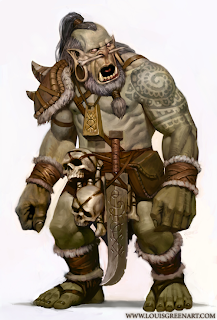 In a burst of genius the halfling used Thaumaturgy to call the wolves he had cowed to his aid (criting a DC 18 Charisma check) and battle was joined.

As our session wound down, the remainder of the party (now reassembled) reached the end of the fork and discovered a cave from which a stream noisily splashed (... mm ... dungeon ... this looked promising ...) while the halfling saw his stalwart wolves cut down one-by-one.  A little more decisiveness, thoughtful deployment of spells (another Guiding Bolt perhaps?), or even deciding to retreat when things started to tip and he probably would have won out against the orcs, but as it was he squandered a turn or two hanging back and watching only to find himself overrun at the end.

As we packed up I suggested to the group that perhaps another lesson had been learned:

"A party of four adventurers may actually be stronger than a party of five when one of them is a bit unstable."

Or to put it more bluntly: "Keep you eyes on the twitchy one or he'll get you killed."
Posted by Jarrett Perdue at Wednesday, November 12, 2014