Lookit!  I'm putting some finishing touches on Skyreach Castle for my older kid's recent birthday celebration.  The adventuring party tracked foul "Cult of the Dragon" agents there, so of course I had to build a big 'ol model for the showdown. 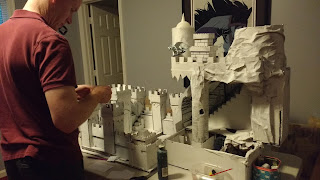 Here's the finished version.  At the front corner you can see Blagothkus the cloud giant who lives there ... yep, the castle isn't built to the scale of my kids characters, but much bigger!  Huey the elf (in blue) is just to the right of the giant and if you look carefully to the upper right ... what?! ... is that a white dragon clinging to the frosty, upper reaches? 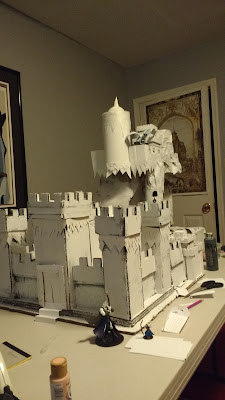 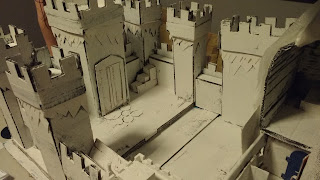 Here are two pics of the interior detail.  The evil Lady Mondath (an 8th level cleric) and a mysterious red wizard (of double-digit level) joined a dozen cultists and a pair of wyvern-y-bat-things to make this one tough fight for the party of 1st through 5th level characters.  Fortunately, they called in every ally and favor, including a friendly griffon, and so the total attacking force numbered around 15. 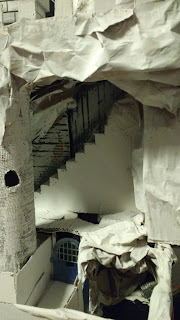 A long tactical/planning discussion filled our first full hour of play.  In the end, the good guys would be divided into three separate teams: one would stage a frontal assault as a feint while another team (composed of the sneakiest and fastest characters) would slip in through a secret tunnel under the castle and launch sneak attacks upon Lady Mondath and the red wizard.  A third team, made up completely of elves and magic-users would provide cover fire via a huge magical telescope mounted in the top of a tower hundreds of miles away (captured from the badguys in a prior adventure).  Training the huge lens on Skyreach, the magic-users could blast away with Magic Missiles and Light spells with impunity.

Four characters and the griffon were slain and two more taken out of the action as the main assault team was pounded by spells and a blast from the dragon, putting them to rout, but it wasn't for nought!  A pair of halflings were able to sneak up behind Lady Mondath and put her evil ways to an end.

The dragon botched a saving throw and, blinded by a Light spell, it retreated to its lair.  Covered by clerical Silence, seven surviving heroes descended to destroy the monster and win its hoard.  The giant, though he slew a much-beloved fighter, proved not to be such a bad fellow after all and once it was discovered that he was only cooperating with the cult because his son was being held hostage, an agreement was quickly made -- a rescue mission is in the offing!
Posted by Jarrett Perdue at Friday, June 17, 2016