Night of the Owlbear

My middle school adventurers are a day or two outside Phandulin on the Triboar Trail, headed east to kill orcs because ... you know ... orcs.

Sticking to my resolve to set aside my "old school" bias, trust the designers, and learn D&D "5th ed." through running things by the book, I dutifully make wandering monster checks and ... rolled a nocturnal encounter with an owlbear -- about the nastiest critter on the chart! That looked like a pretty tough first encounter if I read the new stat blocks correctly, but I figured "What the heck, this could work."

I telescoped the encounter with fleeing woodland creatures (giving clues to the approach and direction of the danger) and eventually a distinctive hunting call that one character recognized from the fireside tales of his elders (there's always a chance). 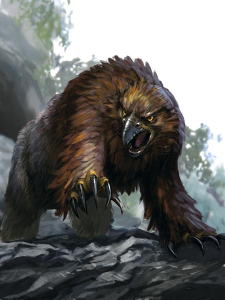 So far, so good -- then the human fighter decided to dash away at full speed into the blind night while the dwarven cleric packed his things hurriedly and set off alone in another direction.  The elven thief headed in yet a third direction and, not wanting to be left behind with only the wizard, the halfling also staggered off blindly into the soggy, overcast night.

"Yes," I thought, "I see another session of character creation on the horizon." 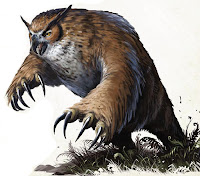 More by luck then by planning, the wood elf thief succeeded in leading the approaching beast into the camp where hilarity promptly ensued.  The dwarf doubled back and his misdirected spell blasted the halfling, dropping him at the feet of the owlbear.  The human fighter staggered back in out of the night and was promptly felled by a beak-claw combo ... then, almost as if there were no other choice, the wizard prepared to direct a Sleep spell upon his own party members ... again ... wait ... yes, that's right, we had managed a frame-by-frame replay of the last fight (with the Nothic), down to the same party "tactics" (scatter blindly), the same character classes (played by the same players), being dropped to zero hit points in the same order ... 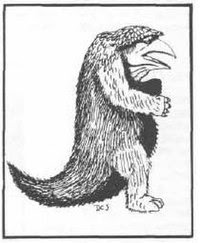 This time there was one difference however:  The elven thief stood back and sniped away at the creature while his friends got mauled, placing himself just far enough back that he wouldn't be caught by the friendly fire of the Sleep spell.  A couple bum rounds on the owlbear's part, a clerical guiding bolt or two, and the remaining characters managed to bring the monster crashing down despite its roughly 50 hit points.

Hearty cheers around the table.  That extra few steps away from the party's wizard had made all the difference -- could they be learning?  I even began to wonder what they would do if a gang of brigands showed up next session.  Past experience says that we'd have to head right back to character generation.

Quote of the Day: "Mr. Perdue!  I realized that Lord of the Rings is basically D&D.  Like when they are on the bridge and the wizard steps out and says, 'You shall not pass!' and the monster rolls to hit and the GM says, 'Make a saving throw or you fall,' and he fails and his friends are like, 'Can we help him' and the GM says, 'Okay, but you need to roll at least a 20.' "
Posted by Jarrett Perdue at Thursday, October 16, 2014