Lately I've been thinking about the (sometimes considerable) differences between art and play across 40 years of D&D.

Erol Otus and Jim Roslof were my entry-point to Dungeons & Dragons as a player, coming perhaps five years before I sat down to read Moldvay-Basic as a DM.

Though I didn't discover them until later, the art of David Sutherland III (DCS) and Jim Holloway came much closer to reflecting the game as I had experienced it.

These adventurers wore backpacks and, like Samwise, knew the value of good rope. 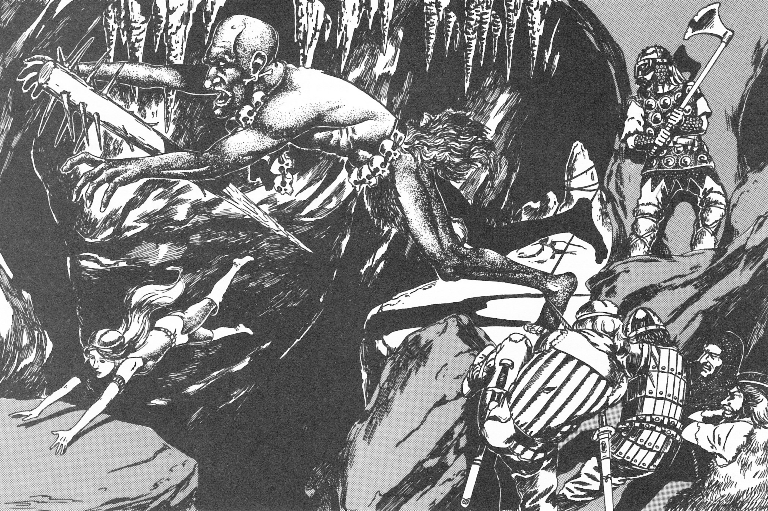 Raiders of the Lost Ark came out in 1981, cementing TRAPS in our young brains, though I didn't need much help ... the very first room of the very first dungeon I ever explored featured an illusion-cloaked pit trap (the dwarf fell in).


10-foot-poles were, therefore, not just a cool flavor item on Moldvay's equipment list (like Wolfsbane); they were essential trap-detection gear!

Oddly, though 10-foot poles were as regular a feature of my late elementary and junior high school games as crossbows or holy symbols, I've noticed that they are almost entirely absent in the artwork of Dungeons & Dragons.


Maybe they are hard to work into a composition, competing with cool shields and swords for a spot in the party members' hands ... maybe the length makes them awkward to represent if the point of view is pulled in close enough to see the monsters' teeth.

In any case, I can think of exactly one image from a TSR AD&D or D&D rulebook, boxed set, or module from 1974-1989 depicting the party toting a ten-foot pole.

Do you know which image I'm thinking of?

Can you think of others?
Posted by Jarrett Perdue at Saturday, May 27, 2017