Book of War: The Dogs of War

My oldest daughter and I have been playing Daniel "Delta" Collins Book of War recently (simulating D&D combat on a mass scale where 1 figure = 10 men) and we decided to take a break from our regular campaign for a pickup game.

This time she chose to build a force composed entirely of dogs, giant wargs, and wolves!

Against her I arrayed archers, medium foot, dwarves, heavy foot and crossbow troops (visible below from left to right). 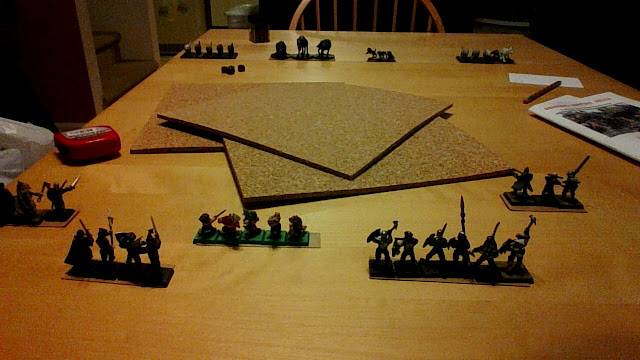 The match played quickly (simplicity and fast play are part of the appeal of Book of War) and the humans were able to drive The Great Pack off, limiting their predation of the fields men know ... at least for now.

In proper D&D fashion, we talked about the skirmish on later truck rides and let story emerge as a product of gameplay (rather than a script to be followed).  This was cool because we got to discover it together. It turns out that the mastermind behind The Great Pack is this little guy ("Napoleon" by name).

He's one of those little dogs who is firmly convinced that he's a big dog.  What's more, the little fellow is gifted with a notion of politics and enough savvy to manipulate larger, dumber dogs into throwing off their collars and turning upon the two-legged oppressors.

So driven is Napoleon in his quest for domination that he has even convinced his mastiff henchmen to ally themselves with their traditional enemies: the wolves ("After all, aren't we truly all part of one breed?  And who benefits from our animosity?  Isn't it the two-legs who set us against each other?!").  Though Napoleon's forces suffered a defeat, we are sure that we haven't heard the last of him or The Great Pack.

Has anyone else tried out Book of War?
Do you have another game or system that you use to simulate mass combat in D&D?
Posted by Jarrett Perdue at Monday, December 12, 2016

Email ThisBlogThis!Share to TwitterShare to FacebookShare to Pinterest
Labels: Book of War