At least that was the case for me from about 5th grade until I graduated high school.  School would close, the guys from the neighborhood would gather for sledding in the powerline (the best hill in the area, even if it did end in a creek), and after we were cold and soaked we'd retire to the basement for six hours or so D&D, Star Frontiers, Dark Sun, Marvel Super Heroes, Robotech, Shadowrun, and Gamma World.

Those few years made a deep enough impression that even now, decades later, when school gets called off on account of snow (as it was all last week) my first thought is usually, "Great, we get to game!"

Fortunately I have a small cadre of hobbit gamers who live right under my own roof these days, and so we spent a chunk of time each day last week pounding through classic TSR module Rahasia. 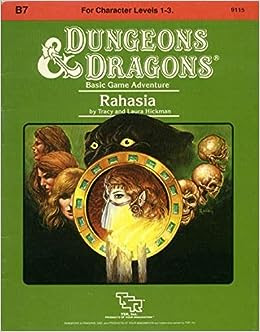 Rahasia was penned by Tracy and Laura Hickman who supposedly were the harbingers of the end of D&D's "golden age" via "The Hickman Revolution," but setting that aside and just looking at the adventure itself ... it's a pretty sweet module with a 100+ room dungeon at its heart.  A few other features Rahasia serves up: 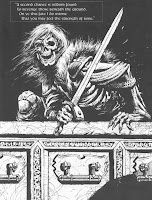 I won't say that it doesn't need any work, but this module has the makings of some seriously good times.  You can get it as a download for $5 from DriveThruRPG to thrill your own role-playing crowd.

Some content I tweaked included the pseudo-Arabian pastiche thing, which left me cold (and didn't suit my milieu), so I cut those bits out and instead made the titular princess so bewitchingly lovely that she could accidentally charm or even slay mortals who gazed upon her.

I liked the magical treasury guardian, but swapped him out for something else because I had a particular model that I wanted to plunk down on the table.

Finally, the deepest few rooms were a bit of a railroad ride, with the Hickman's envisioning one possible way to solve things, but I broke that open a bit and was very pleased with the results ("What happens when you touch the Black Opal Eye to the dragon statue that imprisons the witch's soul?  Well it gives her the power to manifest as a wight!").


So Rahasia was good old school fun, but even more than that, it's really cool how things have come full-circle 30 years later, making snow days something pretty special indeed.