Teens vs B4 The Lost City


For the second week of Adventure Games Camp, I was scheduled to run 20 more hours of tabletop role-playing for a fresh batch of a dozen rising 6th-8th graders.  I knew I wanted to continue exploring the ruined city of Bawal Bayan in its pulp jungle setting, but wanted to keep things fresh and interesting too ... it couldn't all be frolicking with white apes ...

So I flipped around in B1-9 In Search of Adventure, that often disappointing 1987 digest of Basic-series D&D modules, and realized that for all the acclaim that it gets among the old school gaming crowd, I'd never actually run Tom Moldvay's B4 The Lost City -- heresy! 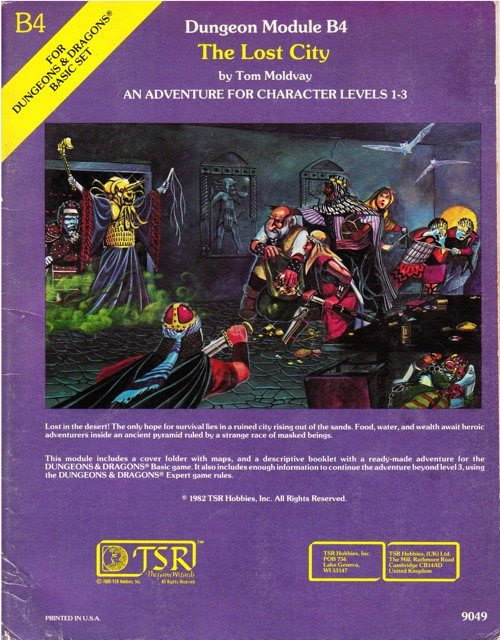 What better opportunity to mend my ways?

I yanked B4's step-pyramid out of the desert, plunked her down in the temple district of Bawal Bayan, and dispensed with the "lost and dying of thirst" railroad opening (which is swell as railroads go ... water as treasure is a nice twist), just leaving a secret door open and letting teenage curiosity run its course.

I made a few other decisions at the outset:
Here are the sketches that I made while running the adventure: 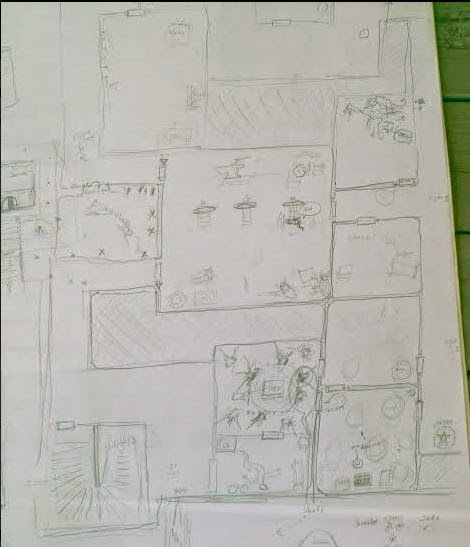 Down the corroded rungs of the ladder,
the next layer of the ziggurat
felt like a maze.


GM: Beyond the door you find a chamber in which a large number of masked people mingle.  Some recline as they consume that bitter, grey bread you saw the others eating before while others listen to a speaker reciting poetry about the final days before the destruction of the city, "before the new age brought by our Lord Zargon."  When they see you [rolling dice] many of them begin to laugh.  "Oh, what a delicious joke!  Oh, you've outdone yourselves with this latest jest!  Bare-face indeed ... she looks so real too."

Elf: Should we cast a sleep spell on them and sneak past them?

Wizard: I don't have any first level spells left, do you?

Elf: I can only cast web.

Wizard: Let's just play along and head for that door.

GM: As you pass through the room they start to applaud.

Wizard: We love you too.  Hail Zargon.

GM: In the next room more masked figures are gathered around a wheel playing some type of strange game.  They seem to be gambling based on their spins of the wheel, but the evidence suggests that apart from winning piles of jade tokens that sometimes the players are killed. [rolling dice] "What do you want?"

Wizard: We are the secret police of Zargon.  We are here because we've heard some disturbing things about this game ...

GM: "Nonsense.  Everything is as it should be here."

Elf: Well maybe if you gave us something, we'd say that the inspection is over and we could just go.

Not only were the explorers successful in bluffing their way past the gamblers but, through their questioning, they also identified the bottle that they had acquired earlier as a potion of "Eternal Slumber" (its match, along with a potion called "The Delight" was being used in the game and gamblers were sometimes required to drink the poison).

Soon they had bluffed their way into the heavily guarded Shrine of Zargon to confront the evil priest.  Even as they entered, the wizard's face completed its transformation into the smiling, silver features of Usamagiras, the Star Sage, foe of Zargon!

GM: There are about fifteen masked figures in the room, being led in hymns to Zargon by their black-robed, gold-masked priest.

Wizard: We bring a message from Zargon!

GM: [rolling dice] "Why do you have the face of our enemy?  How dare you enter this place?"

Elf: He was cursed to have that face until he delivers Zargon's message.

Wizard: Yes, Zargon will show that he is supreme over all the other guys ... like Gorm ... and those other guys.

Elf: Zargon has a special message, but it is only for the high priest.  The rest of you must leave.

Wizard: Zargon says that an entire new world is coming -- that Zargon is going to make a new world and he has chosen you to be its leader, but first you must pass a test.  (I give him the potion of Eternal Slumber)  You have to drink this.

GM: "That is the potion of Eternal Slumber."

Wizard: Yes, if you have enough faith then Zargon will allow you to overcome its effects.  He will give you the power to rise again in a more powerful form.  Only then will you be worthy to rule his new world. 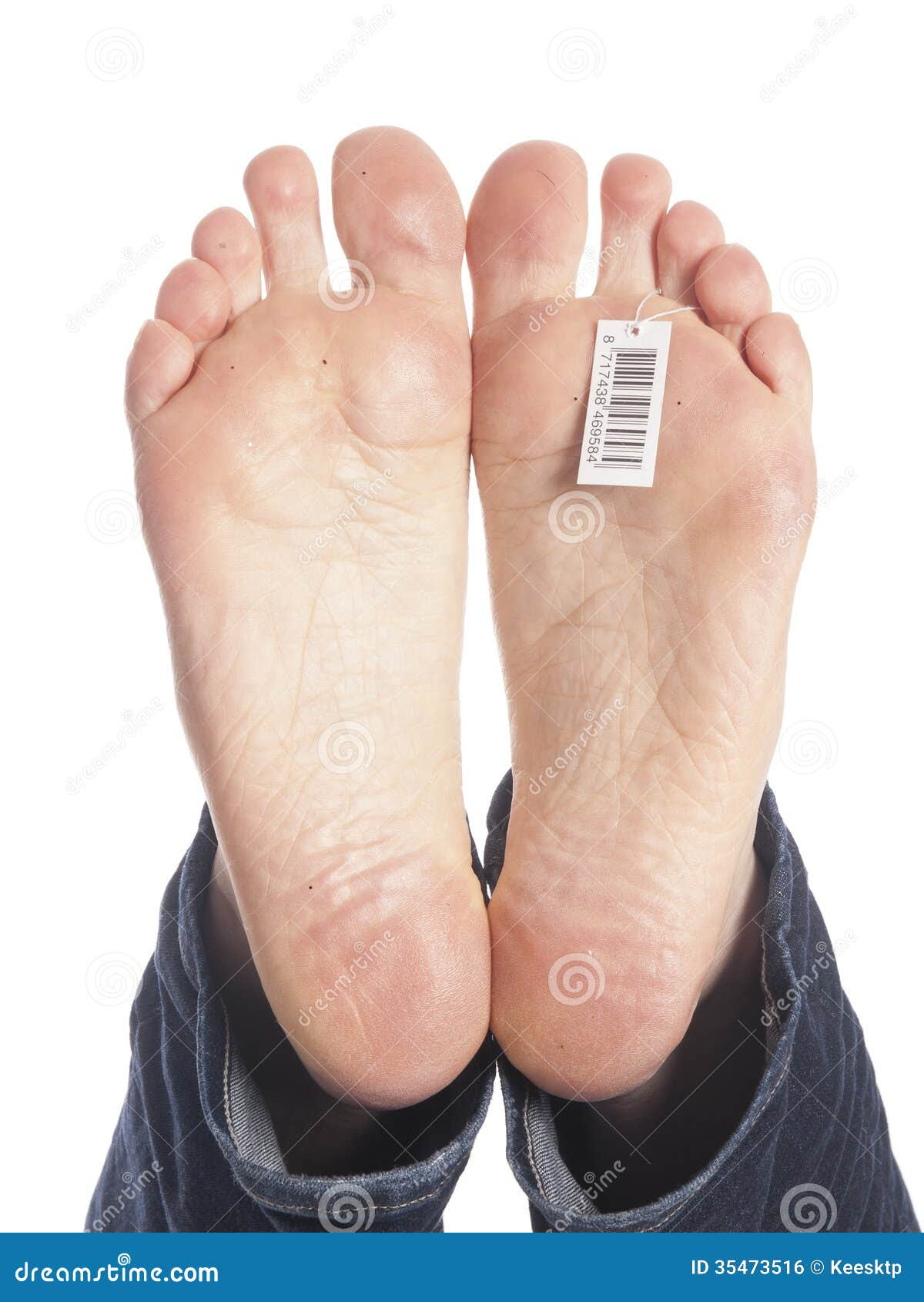 One dead priest of Zargon later, and the wizard had pulled on the gold mask and raiments of the evil cleric.  The pair confined their looting to the body itself, realizing perhaps that they had used up more than their share of luck already.  A quick reverse march was executed and each encounter was begun with an authoritative "Hail Zargon!" to clear the way.  Before long they escaped back up to the third level and from there they were able to beat a hasty retreat out of the ziggurat.