I own Dragon Mountain, the Waterdeep City System, and the Night Below boxed set among others.  I remember ooh-ing and ah-ing over the bright, poster-sized maps that accompany the books in each set as I explored the contents (10 in the case of the City System!).  Even the much more recent Tales of the Shudder Mountains comes with a modest poster-sized area map (though not the extravagent 2' by 3' size that started showing up quite a bit after Undermountain).
The maps are really quite lovely, but I've yet to work out any real USE for them at the table!

1. spread out the map on the table ... the WHOLE table, mind you. Now players can see the dungeon laid out before them ... and that's precisely the problem.  "Should we take that secret door over there or just keep going straight?"  Getting lost isn't possible and at one stroke you've removed both the exploration and resource management aspects of the game.  The boundaries of the dungeon are now safe and known, even if the actual contents of each room remain unrevealed.

2. the DM tries to place the map behind a screen ... a really, really big screen.  Remember, these maps are from the TSR days ... there were only two DM screens printed, each with three panels and big enough to screen about one and a half sheets of paper ... just a bit too small for an open module.  They were also thin as could be and would topple easily if a die was cast too vigorously.  Add dice, a pencil, let alone any minis ... nope, just not room back there! 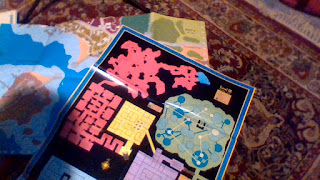 3. place the map on the floor at the DM's feet / a side table ... now I'm craning my neck to peek at a room number and layout several feet from the text that describes the room (vs, let's say, on a module cover 6" away).  Even if the orientation is the same, I'm much more likely to either make a mistake or require more time to avoid one.
Here's a prime culprit in Ruins of Undermountain.  The complexity IS the challenge ... but if I let the players see the map, then I've removed that challenge.

4. oragami.  I can try to predict where the PCs will roam and do some speed oragami to get the map positioned properly ... but good luck!  The appeal of these settings IS their grandeur and vastness.  Racing from one end of Waterdeep to the other, peering in shops and dodging enemies is exactly what the scale encourages, but if I'm folding and fiddling with sixty square feet of city map, the flow of play is spoiled and the sense of expansiveness is gone ("Oh look, he just knocked his screen over again.").

We can solve things now digitally of course ... but that wasn't an option when these strange and striking gaming tools were published and sold.  Laptops were just beginning to show up at the table, and touch screen tech wasn't in the home yet.

Dwimmermount's separate map book and Stonehell's stacked one-page dungeon quadrant system (though not without their own limitations) are attempts to invoke depthless grandeur without losing functionality.  I don't know how Barrowmaze approaches the same problem, but I bet the solution is similar.

So, apart from today's work-arounds, did anyone back in the day ever figure out how to actually USE these huge, magnificent, unique, and apprently impractical tools?